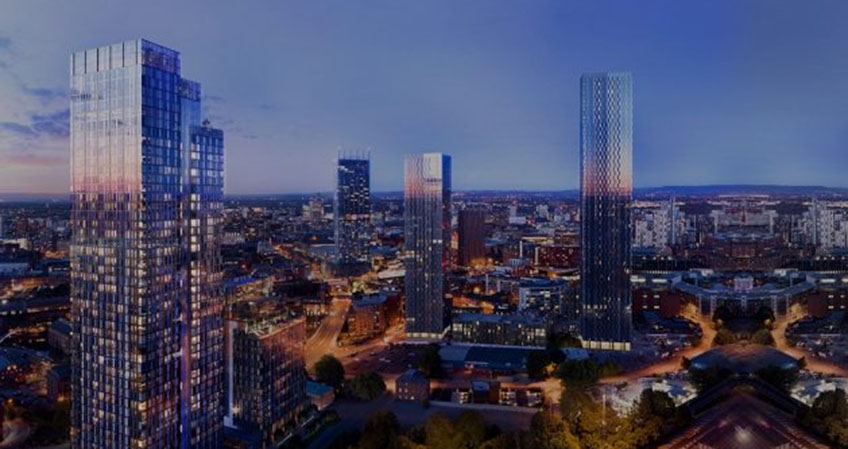 Manchester-based developer Renaker Build Ltd is moving forward with two 51-story towers as part of its large-scale redevelopment of Great Jackson Street on the edge of Manchester city center, including more than 850 apartments.

The two high-rise buildings, designed by SimpsonHaugh, will form the second phase of Renaker’s Crown Street scheme. Between them, the buildings would include 865 apartments, a primary school, with a public park and public car park planned alongside.

The plot is next to the Chester Road roundabout and Mancunian Way, sitting beside the first phase of Crown Street, where Renaker is on site with the construction of Elizabeth Tower. The 52-story building and connected 21-story block, with a total of 664 apartments, were also designed by SimpsonHaugh.

Last month, it was revealed that Maslow Capital had backed Crown Street with a GB£123 million (US$158 million) development loan.

Crown Street is one of the first phases of development within the master plan for the Great Jackson Street area. This includes Deansgate Square, Renaker’s four-tower cluster currently nearing completion, and sites owned by DeTrafford, with planning consent for towers of 32, 26, 18 stories on Olympia Trading Estate, also designed by SimpsonHaugh.

Overall, Great Jackson Street is earmarked for more than 6,500 apartments across 23 towers, as well as lower-rise blocks and townhouses.

Renaker is hosting a consultation event on the latest proposals on Wednesday 27 November 2019. Deloitte is the planner advisor.

For more on this story go to North West Place.