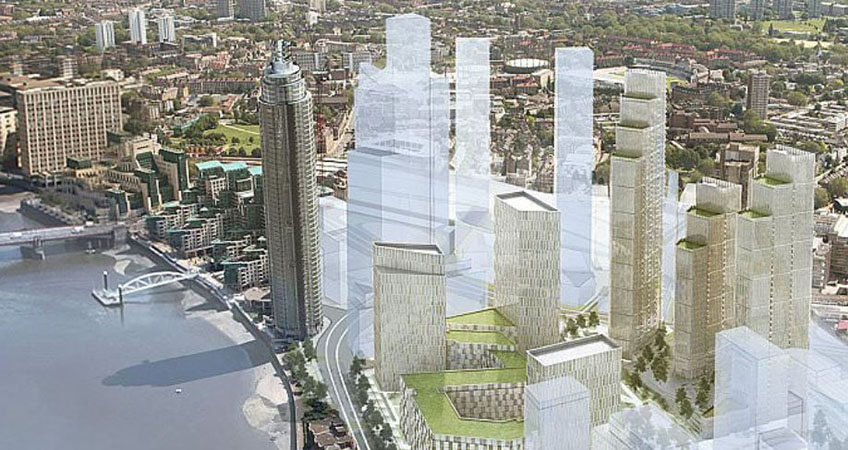 The redevelopment is on a stretch of land next to the US embassy at Nine Elms in the City of London.
09 September 2019 London, United Kingdom

International consultancy and construction firm Mace has landed a prized deal to build three towers for R&F Properties, the Chinese firm behind the redevelopment of a stretch of land next to the US embassy at Nine Elms in the City of London.

The contractor has won the first phase of the Nine Elms Square project which involves building the mixed-use towers and a podium.

Designed by Skidmore, Owings & Merrill, the three buildings will range from 36 to 54 stories and will provide 880 apartments running across 11,555 square meters.

The deal is Mace’s first for R&F and the firm’s chief operating officer for construction Gareth Lewis said: “we are proud to take on the challenge of delivering part of Vauxhall’s latest iconic residential development, at the beginning of what we hope will be a long and successful relationship with R&F Properties.”

The first phase has a gross development value of GB£480 million (US$593 million) with the entire Nine Elms Square scheme set to consist of 12 buildings and close to 2,000 homes.

A neighboring Multiplex and R&F scheme, One Nine Elms, has been designed by another US architect, Kohn Pedersen Fox Associates, and involves two towers of 56 and 42 stories. A five-star hotel is also being built as part of the Multiplex deal which has a construction value of more than £650 million (US$803 million).

Listed in Hong Kong, R&F has been on an acquisition spree in recent years, having snapped up Nine Elms Square, previously known as Vauxhall Square, for £158 million (UD$195 million) from CLS Holdings in April 2017 just a month after buying the Queen’s Square site in Croydon, which includes the former Nestle building, from Delancey.

One Nine Elms was being previously developed by another Chinese firm Dalian Wanda who sold the site to R&F at the beginning of last year for close to £60 million (US$74 million).

For more on this story go to Building UK.