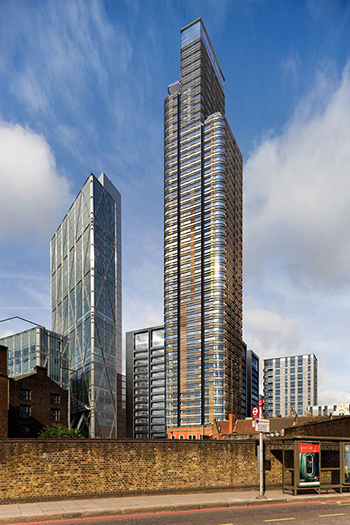 New Approval Being Sought for Residential Tower After Design Changes

Controversial plans to build a 27-story tower and 462 new homes at 100 West Cromwell Road in Kensington could be approved by London Mayor Sadiq Khan within a few weeks of 9 January 2020. Dutch real-estate investor Meyer Bergman’s bid to redevelop a huge site, between West Cromwell Road and Warwick Road, was rejected by Kensington and Chelsea Council in May 2019.

After negotiations with City Hall, the developer’s new offering now has a skyscraper that’s five stories taller than before. Despite the change, the scheme stands a better chance of getting planning permission, after councilors instead decided they would write to Mayor Khan and recommend he approve it. The plans originally included eight blocks, one at 22-stories tall, and seven others ranging from 11 to 14 stories.

For more on this story, go to MyLondon.

The latest phase of Quintain’s Wembley Park Plot EO5 is underway as of January 2020.

Forming part of an 85-acre (34-hectare) project that will see the transformation of an abandoned industrial area into a public-facing mixed-use space, EO5 includes the construction of three tower blocks ranging between 10 and 22 stories high and encompassing 458 apartments.

Steve Davis, National Business Development Manager at Dietzel-Univolt commented said, “This is a massive project that once completed will become the largest single-site of Build to Rent homes in the UK, it also marks an incredibly important regeneration scheme that will ultimately transform the area. We’re incredibly pleased to have been specified as part of the scheme, recognizing our products meet the standards expected of a high spec development in terms of both aesthetics and performance.”

Located close to Wembley Stadium, the development will benefit from features including basement bicycle and car parking, coach parking at ground level and two levels of accessible stadium parking as well as 7,755 square meters of outdoor amenities. Completion is planned for Spring 2021.

For more on this story, go to Electrical Times.

The completion of Principal Tower is the final piece of the Principal Place masterplan, a comprehensively planned mixed-use scheme on the border of Shoreditch and the City of London that creates a new neighborhood, drawing on the industrial heritage of the area. It comprises a 15-story office building that hosts the London headquarters for Amazon, alongside one of London’s tallest residential buildings, the 50-story Principal Tower, with six eateries that wrap around the building at street level, and a light bar, which creates a 360-degree active frontage that extends the vibrancy of the City towards the north.

The relationship between the creative, formerly industrial east end and London’s financial center is expressed in the tower’s massing, which appears as three slim volumes. Where the tower addresses the residential neighborhood of Shoreditch, it appears lower from ground level, while from the west it reflects the high-rise nature of the City. A central volume rises between the two to provide an elegant marker on the skyline.

For more on this story, go to Foster + Partners.

Observation Tower Plans Being Appealed After Rejection by Mayor

Last summer Khan overturned the City of London’s earlier approval for the proposed skyscraper next to the Gherkin, saying he had several concerns about the project including about its design.

Rejecting the scheme, he criticized the structure for being “a vertical solid shaft” that ended abruptly and that did not “represent world-class architecture.”

It is understood the appeal against the mayoral decision will be lodged ahead of the six-month cut-off point on 19 January 2020. The project is backed by banking giant the J Safra Group, owner of the neighboring 30 St Mary Axe since 2014.

The London mayor’s refusal in July 2019 for the scheme at 20 Bury Street in London’s Square Mile came in the wake of heavy opposition to the proposal from Historic England and Historic Royal Palaces.