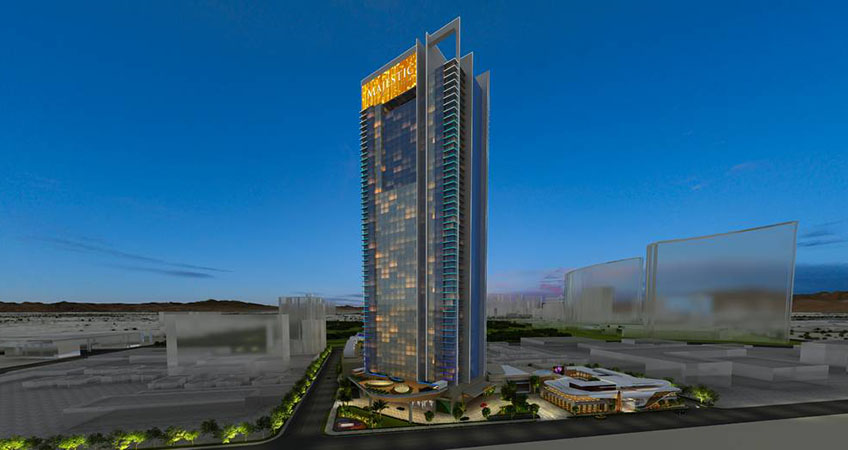 The site is located directly across the street from the new Las Vegas Convention Center, which will be opened in 2021, two blocks from the Las Vegas Strip.
05 September 2019 Las Vegas, United States

Las Vegas developer Lorenzo Doumani is set to break ground on an $850 million luxury resort in Las Vegas. The five-star, non-gaming, 720-room, all-suite resort will be located on the six-acre (2.4-hectare) site formerly occupied by Clarion Hotel, which Doumani imploded in 2015.

“The Majestic draws inspiration from architect Paul Williams’ La Concha Hotel (now demolished), which was built by the Doumani family in 1961.”

Drawing inspiration from architect Paul Williams’ La Concha Hotel (now demolished), which was built by the Doumani family in 1961, the Majestic Las Vegas has been designed by architect Paul Steelman.

The site is located directly across the street from the site of the new Las Vegas Convention Center, which will be opened in 2021, and is two blocks from the Las Vegas Strip.

Majestic Las Vegas will include six standalone restaurants, a landscaped pool area with 50 cabanas, an area for live entertainment, as well as health and wellness facilities.

The four-level, 70,000-square-foot (6,503-square-meter) fitness, nutrition and med spa facility will serve as a medical wellness destination, offering an assortment of treatments and activities, in addition to amenities such as personal nutritionists and comprehensive executive physicals.

Corporate Sky Suites, situated on levels 51 to 60, are designed to serve tech, entertainment, or sports companies. Offered in partial- to entire-floor options, the fully customizable suites will showcase high ceilings and panoramic views of the Las Vegas skyline. Sky Suite owners will have a private concierge, an exclusive Owner’s Club, and marquee signage.

Doumani said: “It is time for Las Vegas to provide a luxury option for those who visit our city who want something that is non-gaming. When one walks into Majestic Las Vegas, you can instantly sense that this is a very special place. And whether you want to relax in the lap of luxury, host a meeting or event in your own corporate space, facilitate an executive retreat, or launch a new product, Majestic Las Vegas offers the ideal marriage of sophistication, luxury, and strategic location.”

Construction is scheduled to commence in May 2020, and the project is slated for completion in early 2023.

For more on this story go to World Construction Network.