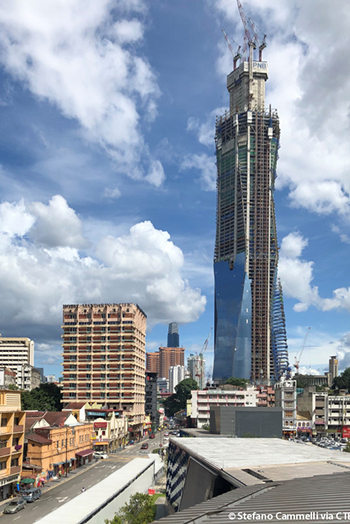 When complete the skyscraper is set to reach a height of 644 meters. Image credit: Stefano Cammelli via CTBUH.
08 May 2020 | Kuala Lumpur, Malaysia

Construction work at Permodalan Nasional Bhd’s (PNB) Merdeka 118 has been delayed by roughly two to three months due to restrictive measures taken to curb the spread of the coronavirus.

Prior to the implementation of the Movement Control Order (MCO) on March 18 2020, the soon-to-be tallest skyscraper in South-East Asia was nearing 50 percent completion.

“The site was shut down for the first three phases of the MCO. Preparations are now being made to resume work which should begin this week.

“Based on the preliminary view, there could be two to three months’ extension including the period where no work was allowed under MCO, as well as an adjustment phase which we are currently undergoing.

“We are strictly screening our workers’ temperature, staggering staff hours to manage the crowd and practising social distancing at the site. It will take some time to have an operating rhythm and we aim to catch up as much as possible with the time lost,” he said at PNB’s first virtual press conference yesterday.

In terms of construction materials, Abdul Jalil said many are sourced locally, while those sourced from overseas are available in storage.

“There is enough for us to do over the next six months or so, so we can start work immediately,” he said.

PNB group chairman Tan Sri Dr Zeti Akhtar Aziz said the completion of the superstructure is now slated for late 2021 upon which PNB will shift its operations where it will take up 17 floors and operate the observation deck on the top four floors.

Zeti had previously said there were no plans to sell its current headquarters at Jalan Tun Razak, Kuala Lumpur, due to its strategic location.

There are also several projects in the pipeline including a 1,000-seater theatre, a ballroom and a 1.6-hectare park.

For more on this story, go to The Malaysia Reserve.