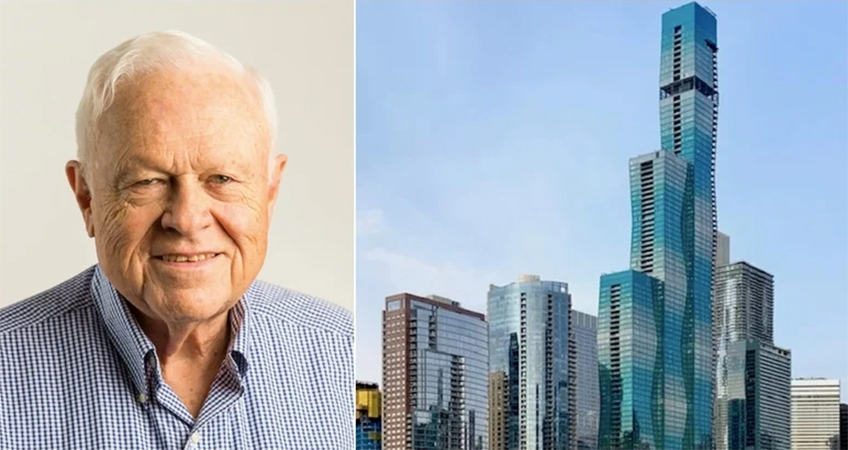 James Loewenberg, a Chicago architect-turned-developer with a portfolio that includes the Aqua and Vista Tower skyscrapers in downtown Chicago, has died at age 86 after a bout with cancer, according to a statement from his family.

Until last year, Loewenberg was co-CEO of Magellan Development Group, the firm behind Lakeshore East, a 28-acre (11-hectare) site project of the Chicago River and east of Michigan Avenue begun nearly two decades ago. He and co-CEO Joel Carlins, created a high-rise neighborhood there, developing multiple residential buildings around a park, tapping Chicago architect Jeanne Gang to design the two most famous ones, Aqua and Vista.

Loewenberg and Carlins stepped down in December 2019 relinquishing the CEO title to David Carlins, Joel Carlins’ son, and selling their interests in Magellan to New York-based Winter Properties and BLG Capital Advisors of Chicago.

“Jim Loewenberg was a great man of great integrity and innovation in the real estate community,” David Carlins said in the statement. “His work had deep significance within our beautiful city and it will remain his legacy.”

Born in 1934, Loewenberg followed his father, Max Loewenberg—whose works included the Whitehall Hotel and the current Hotel Lincoln—into architecture. He grew up in downtown Chicago but graduated from North Shore Country Day in Winnetka, joining his family’s architecture practice after receiving a bachelor’s degree in architecture from the Massachusetts Institute of Technology.

Focusing primarily on the Chicago residential market, Loewenberg designed and developed buildings, many along North Lake Shore Drive. In the 1980s, he started teaming up on projects with Joel Carlins, formally joining forces in 2006, when Loewenberg merged his company, NNP Residential, with Magellan, led by Carlins.

Either as an architect or developer, Loewenberg had a hand in the creation of 45,000 residential units and more than 500,000 square feet (46,451 square meters) of commercial space, according to the statement. He won the Urban Land Institute’s Chicago Lifetime achievement award in 2009.

Construction on Vista is nearly complete, though the project faces an uncertain future amid a sluggish downtown condominium market and questions about a hotel planned within the 101-story tower on Wacker Drive, the third tallest in the city. Magellan recently bought out its Chinese partner in the project.

With its wavy balconies, Aqua, which includes condos, apartments and a hotel, may be Magellan’s most popular building in the city, winning multiple design awards and fans on architectural river cruises.

“Jim trusted me and I will always hold a special spot in my heart given the creative opportunity he gave me with my first high-rise, Aqua, and most recently my tallest high-rise Vista,” Gang, founder of Chicago-based Studio Gang, said in the statement.

Loewenberg lost his battle with pancreatic cancer on 14 October 2020. He was married for 63 years to Nancy Loewenberg until her death last year. He is survived by his sister Doris Kraus, his daughter Robin (Mark) Tebbe, grandchildren J.R. (Katie) Berger and Michael Berger and step-grandchildren Steve Tebbe and Kira Tebbe. He is also survived by two great-grandsons Max and James Berger.

A memorial service will be held at a later date. The Gallery On Wells