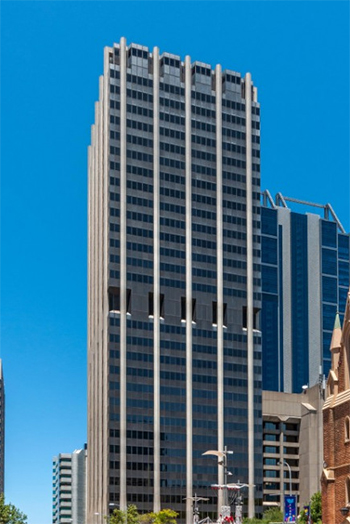 The 30,000-square-meter building is in a prime location in the center of Perth. © Roberto Portolese
28 April 2021 | Perth, Australia

Primewest has inked a joint-venture deal with a fund advised by BlackRock Real Assets to reportedly spend AU$260 million (US$202 million) on the former AMP office tower in Perth.

It is the first JV arrangement between the two funds, and the first deal since the announcement of the proposed AU$600-million (US$468-million) merger between Centuria Capital and Primewest.

It follows AMP’s exit from the 28-level A-grade office building at 140 St Georges Terrace as it attempts to divest and fend off a merger from rival ASX-listed fund Dexus.

The office tower is part of AMP Capital Diversified Property Fund’s AU$5-billion (US$3.9 billion) portfolio, whose unit holders voted in favor of a merger with Dexus on Tuesday.

Primewest has been completing exclusive due diligence for the property.

Primewest executive chairman John Bond said the joint venture would aimed to enhance the asset with a new strategic management and leasing campaign when the deal settled in June.

“[The property at] 140 St Georges Terrace is a high quality, 30,000-square-meter A-grade office building at the epicenter of Perth’s CBD,” Bond said.

“A significant amount has been spent on capital upgrades in recent years and we see further value creation opportunities for the asset given our on the ground team, proactive management approach and in-depth Perth market knowledge.

“This will be further enhanced by BlackRock’s significant global reach, experience and vision.”

Bond said the property had been a gateway CBD building for more than 40 years and Primewest would continue its pedigree and presence in the city landscape.

Centuria Capital mooted a AU$600-million (US$468 million) deal to merge with Primewest earlier this month, to form a AU$15.5-billion (US$12.9 billion) portfolio of assets under management, representing a 53 percent lift in Centuria’s managed assets.

The compulsory acquisition process is due to begin in mid-June, provided a number of pre-conditions are met.