Iconic Chicago Tower Bets on the Future of Co-Working 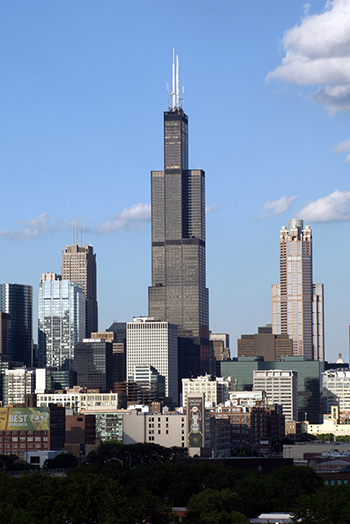 A private equity group has leased 4,830 square meters of space to a New York City based company, one of its bids of confidence in the future of co-working.
13 October 2020 | Chicago, United States

Reports of the demise of co-working during the pandemic are greatly exaggerated, if you ask the owner of Willis Tower.

In a bet on the future of flexible office space, private-equity giant Blackstone Group has leased 52,000 square feet (4,830 square meters) at the city's tallest building to New York-based Industrious, which will open its eighth downtown Chicago location there early next year, the companies announced.

The deal comes amid a pandemic that has slowed the rapid expansion of shared office space, which thrived in recent years as small businesses and big corporations alike flocked to low-risk, flexible offices they could rent by the month. Skeptics of co-working's resilience in a downturn have argued users would crush shared office providers by abandoning their short-term leases when the economy soured, whereas proponents have said a recession would instead push more companies toward lease flexibility.

It's still unclear which theory will prove out long term, as the coronavirus pandemic keeps its grip on the economy and many people working from home for the foreseeable future. But the Industrious deal demonstrates that some investors still see a bright future for co-working.

“Current events are reinforcing the importance of flexibility and adaptability for every organization, and many companies are seeking new options to support different modes and methods of work for their employees,” David Moore, senior vice president and portfolio director for Blackstone's EQ Office unit, said in a statement.

Key to the lease is that EQ Office and Industrious will share in revenue the space generates. That management agreement approach, as opposed to an arms-length lease signed by a co-working provider, has become more popular among landlords as a way to reap the benefits of co-working—including both rent and a potential in-house breeding ground for startups that could grow into long-term tenants—but also share in the risk that comes with having a co-working tenant.

Terms of the Willis Tower deal were not disclosed. Industrious has expanded its footprint during the COVID-19 crisis, announcing or opening 600,000 square feet (55,741 square meters) of new space so far in 2020 as many companies re-evaluate their workspace needs.

That belies predictions that the industry is shrinking. A recent report from brokerage Jones Lang LaSalle estimated some 20 percent of the roughly 25 million square feet (2,322,576 square meters) of co-working space nationwide will close or change operators as a result of the pandemic.

“Moving forward, the office is going to need to be somewhere people want to be, and EQ has done an incredible job of making Willis Tower somewhere workers would want to spend their days," Industrious CEO Jamie Hodari said in the statement. "What we do at Industrious is an essential part of that, plugging Willis Tower into a broader Chicago network that puts power in employees' hands to choose where to work and when to work there."

Industrious will join a Willis Tower tenant roster that already includes New York-based Convene, one of its chief rivals in the flexible office space sector. Convene will still operate a 73,000-square-foot (6,781-square-meter) meeting and event space in the five-story addition Blackstone will soon complete around the tower's lower floors. That project, dubbed Catalog, is the centerpiece of a broader US$668 million renovation of the skyscraper that includes a new fitness center, tenant lounges and remodeled elevators, as well as plans for a revamped Skydeck attraction.

The Industrious deal brings the building to roughly 95 percent leased, according to an EQ Office spokeswoman.

Industrious, which will now have nine locations in the Chicago area totaling 350,000 square feet (32,516 square meters) is one of the largest flexible office space providers among the more than 3.3 million square feet (306,580 square meters) of co-working space downtown, according to data from brokerage Newmark Knight Frank.

New York-based WeWork has by far the largest presence, with more than 1 million square feet (92,903 square meters), though it started to curb its growth streak after a botched initial public offering last year that led to the ouster of its CEO. The company recently bought out a pair of leases totaling 110,000 square feet (10,219 square meters) it had signed at 1155 and 1114 W. Fulton St. in the Fulton Market District.