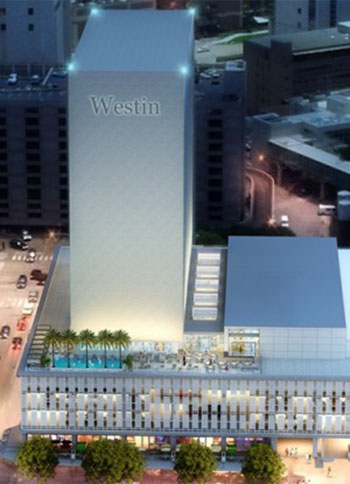 Houston’s newest high-profile hotel project is a win for preservationists, and an unlikely but fortuitous outcome for a once-acclaimed modernist building, which until recently was used solely as a parking garage.

Come early 2020, a flagship Westin Houston Medical Center will open at 1709 Dryden Road, located on a valuable site between Main and Fannin streets, amidst a large medical complex.

The ambitious 382,000-square-foot (35,500-square-meter) redevelopment, which also boasts renewed retail and restaurant spots along its streetscape, is blocks from the campus of Rice University and a quick rail ride to the Museum District.

Over the decades, the 18-story, architecturally significant skyscraper known as the Medical Towers began to languish in obscurity, despite its prime location within the Texas Medical Center, directly across from Houston Methodist and Texas Children’s Hospital.

Then a Houston-headquartered group stepped in.

“The Medical Towers was one of the first uses of the curtain wall in North America,” said Mark Benoit, design consultant with MBCM Inc.

Canada-based Benoit has been brought in by Pearl Hospitality to oversee the challenge of updating the mid-century tower to its next usage.

Martin Nadelman developed the Medical Towers; he was also the developer of the luxury Memorial neighborhood Sandalwood of the same era. He was joined by a group of physicians who formed the Center Medical Building Corporation in the early 1950s. The $4 million project foreshadowed the rising importance of the Texas Medical Center.

When Medical Towers was unveiled on Monday, September 17, 1956, Mayor Oscar Holcombe led the opening ceremonies alongside Nadelman, president of the development corporation. As the Houston Chronicle detailed in a Sunday, September 16, 1956, story: “Medical Towers, a building of striking appearance, won for its designers … a special award from Progressive Architecture, one of the nation’s leading architectural magazines.”

In its heyday, 175 medical professionals — reflecting all specialties of medical and dental practices — had practices in the tower that rose above the low-slung horizontal base of the building.

Floors two through four provided parking complete with attendants, as well as a concierge-type experience — delivering packages up to parked cars — from the retail shops that lined the first floor.

Its primary architects Golemon & Rolfe are responsible for the terminal design of Bush Intercontinental Airport in the late 1960s, as well as the George R. Brown Convention Center and the Humble Oil (later ExxonMobil) Building (now 800 Bell).

Their consulting architect was Gordon Bunshaft, whose iconic Lever House was designed in 1952, rising in Midtown Manhattan, is considered a a touchstone of the International Style of architecture.

Sanghvi’s Houston-headquartered firm, Pearl Hospitality, is giving a second chance to a building could have easily been destined for the wrecking ball.

Not only is this mid-century building being saved, but it now boasts a National Register of Historic Places designation and will, within approximately a year, become a hub for Museum District visitors and those traveling to the Texas Medical Center.

For more on this story, go to Paper City.