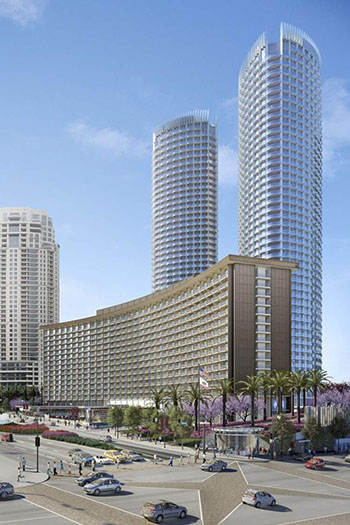 The ambitious $2.5-billion Century Plaza project, centered on the landmark crescent-shaped hotel that has hosted presidents and rock stars over more than five decades, has taken a major step forward.

The developer, which once proposed demolishing the modernist hotel, spent years working with the city, architectural preservation groups, neighboring homeowners and labor organizations to finalize the project. Now, Woodridge Capital Partners says that the hotel, the hotel residences and a portion of the planned retail space will open in spring 2020.

The two 44-story towers, designed by Pei Cobb Freed & Partners, are part of the larger redevelopment plan at the Century Plaza Hotel at 2025 Avenue of the Stars.

The Century Plaza project includes a 400-room flagship Fairmont Hotel with a collection of 63 hotel residences, and the new estate tower residences. In total, the project contains 331 luxury condominiums and thousands of square feet of retail, restaurant and lifestyle space.

“The hotel’s ultra-modern renovation will blend future and past by preserving elements of the original architecture.”

The hotel’s ultra-modern renovation will blend future and past by preserving elements of the original architecture, such as the classical balconies and anodized aluminum exterior. It was designed in 1966 by Minoru Yamasaki, an American architect who also designed the original World Trade Center.

“The project team worked closely with the Los Angeles Conservancy and the National Trust for Historic Preservation to restore the hotel’s splendor from when it first opened,” said Mary Ann Osborn, Woodridge’s managing director of sales and marketing.

For the hotel specifically, Osborn is expecting to attract bi-coastal and international buyers.

Having stalled for years in the marketing of the twin condominium buildings and luxury hotel residences, Woodridge Capital Partners says it has closed on more than $200 million in condominium pre-sales.

The units start at $2 million and go up to as much as $50 million each, a Woodridge spokesperson said.

Woodridge Chief Executive Michael Rosenfeld bought the property for $366.5 million in 2008. Early on, he wanted to erect two 50-story towers in place of the hotel, but the proposal never flew.

The 211 Elm and 115 Park towers are slated to open in early 2021, according to the Woodridge Capital spokesperson.

For more on this story go to The Los Angeles Times and The Real Deal.