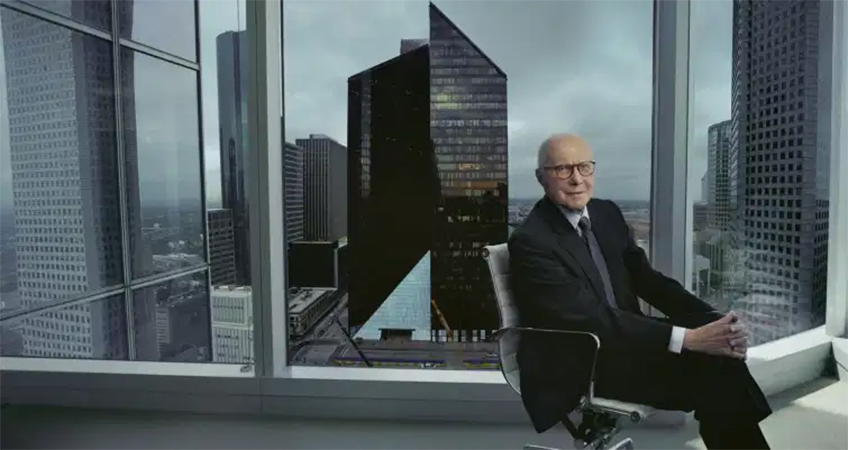 Gerald D. Hines, who turned a one-man real estate office in Houston into the global developer Hines, died last night at his home, Hines announced. He was 95.

Hines eponymous real estate firm grew to have 4,800 employees and has worked more than 907 projects in 25 countries around the world, according to the company. Its founder helped shape Houston’s skyline and is the namesake of the city’s landmark 64-foot-tall (19.5-meter-tall) water wall, which Hines built as part of the Williams Tower in 1983, but later sold to the city to become a public park.

The company has about US$144.1 billion of assets under its management, including US$75.5 billion in investments that it manages, according to Hines. Its holdings include Houston’s One Shell Plaza, which was the tallest building in the city when it was built in 1971; the Lipstick Building in Manhattan; and the DZ Bank building in Berlin.

“Beyond his significant, impactful career and his pioneering contributions to architecture, sustainability and the built environment, Dad felt his greatest achievement is the team of dedicated professionals who have, and will continue to, carry on his legacy of peerless quality, integrity and innovation,” his son, Jeffrey Hines, who will assume the role of chairman and CEO, said in a statement.

The developer has been an active player in New York City in recent years under the management of Tommy Craig. It has an ownership stake in SL Green Realty Corp.’s 1.6-million-square-foot (148,644-square-meter) office development One Vanderbilt, a 49.5 percent stake in One Madison Avenue and has been the operating partner for Trinity Church Wall Street’s 12-building office portfolio in Hudson Square.

Gerald Hines was born in August 1925 in Indiana, and graduated from Purdue University with a degree in mechanical engineering, the company said. He relocated to Texas, and opened a one-man office in downtown Houston in 1957.

He helmed his namesake company until 1990, when he transferred day-to-day operations to his son Jeffrey. Hines relocated to London in 1996, where he grew Hines’ presence in Europe, and returned to the states in 2010, the company said.

Hines received numerous awards and accolades throughout his life, including honorary doctorates from Purdue and the University of Houston. He also helped establish the Urban Land Institute’s Gerald D. Hines Student Urban Design Competition; and the University of Houston’s architecture program was renamed the Gerald D. Hines College of Architecture and Design in 1997 after he donated US$7 million to the college.

He is survived by his wife, Barbara, his four children, 15 grandchildren and one great-grandson. He will be laid to rest in a private ceremony in Aspen, Colo., with the family planning a public memorial in the future “when it is safe to congregate,” according to the company.

For more on this story, go to Commericial Observer.