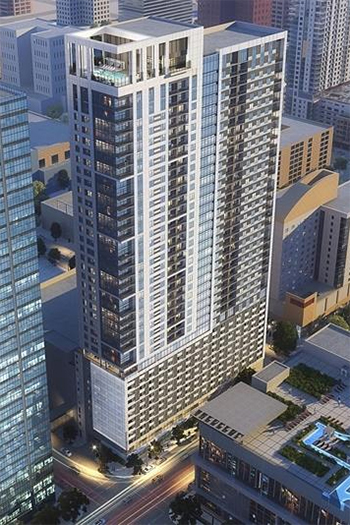 The tower will include 309 apartment units in a mix of one-, two- and three-bedroom floor plans, including 16 two-story townhome-style units on the 15th through 34th floors and four two-story penthouses on the 41st floor. Units will feature 9- to 10-foot ceiling heights (2.7 to 3 meters), floor-to-ceiling windows, blackout shades, kitchens with gas ranges and quartz countertops, European-made custom cabinetry, spa-like bathroom features, and large custom closets.

There will be three levels of amenities, including a rooftop pool with indoor and outdoor lounge areas and a cantilevered observation deck more than 430 feet (131 meters) above street level. The 14th-floor amenities will feature a lounge and clubroom, including a catering kitchen; a fitness center; two guest suites for short-term stays of residents’ guests; an enhanced work-from-home center with conference rooms and coworking arrangements; an outdoor fireplace and seating area; barbecue grills; a yoga terrace; and multiple seating areas with views overlooking Discovery Green. Other amenities will include a coffee and refreshment bar; a covered dog run and indoor pet spa with grooming stations; 24/7 valet parking and concierge and security services; bike storage; and private air conditioned storage.

The project is touted as the only luxury high-rise in the area that will offer direct access to the Houston skywalk/tunnel system, per the release.

“The Discovery Green neighborhood, and the greater Houston (central business district), have seen significant investment in new hotel, retail, residential, office, entertainment venues, public amenities and infrastructure over the past 15 years, including the Hess Tower, a trophy office building next door developed by Trammell Crow Co.," Jim Casey, senior managing director of High Street Residential, said in the release. "This marks the next chapter in the Discovery Green success story and an expansion of a dynamic mixed-use and walkable environment."

For more on this story, go to Biz Journal.