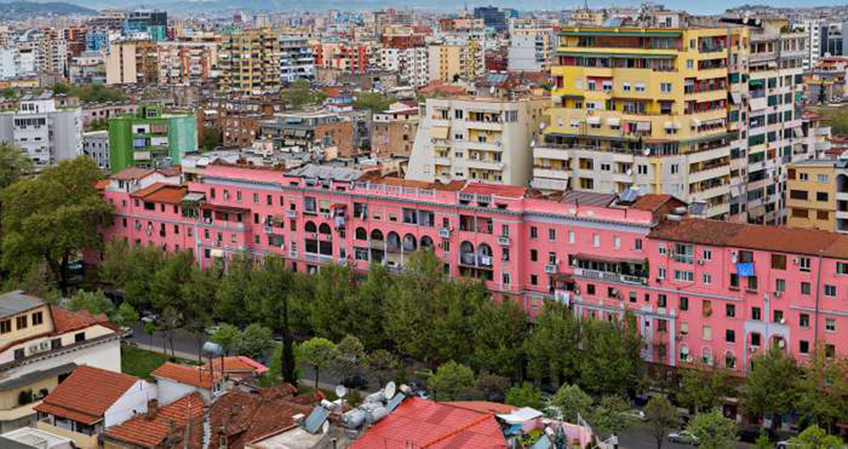 A 16-story hotel is slated to replace an old villa in the Bllok area of Tirana that was recently demolished.
19 May 2020, Tirana, Albania

A 16-story apartment building will replace what used to be the old villa that housed Bar Dada in the Bllok area of Tirana, until its demolition in February 2020.

The construction permit for this apartment building, which will be called City Hotel, was given by the National Territorial Council (KKT), headed by Prime Minister Edi Rama, to entrepreneur Agim Zeqo in October 2019.

Other Referenced Buildings
4-ever Green

The building is being constructed by Nova Construction 2012, owned by Ilir and Kujtim Shtufi.

The project is designed by the Italian architect Marco Casamonti’s studio, Archea Associati, the same architect that designed Tirana’s stadium building. Casamonti is known for being close to the Prime Minister. Casamonti’s unfinished 4-ever Green tower in Tirana.
The apartment building is expected to have four underground floors, and 12 above ground ones. The project plan seems to indicate a style similar to that of the Forever Green building in Tirana, whose construction has been ongoing for the past 10 years. This building was also designed by Casamonti. Both building designs stand out for their irregular window placement and terrace gardens.

The City Hotel building will be a multifunctional one, combining residential and office spaces.

Currently three more high-rise buildings are being built in the Bllok area’s narrow alleys. A 13-story building will replace the former villa that housed the private Metropolitan University. A multifunctional complex called Blloku Cube and designed by Stefano Boeri is being constructed a few meters away. Another of Boeri’s projects, West Residence, is being built in the area behind the President’s Office.

Meanwhile, throughout Tirana, the municipality has granted construction permits for the construction of high rise buildings along the capital’s main streets and squares.

At least 12 high-rise buildings, with an average height of 12-stories, are currently being constructed.

For more on this story, go to Exit News.