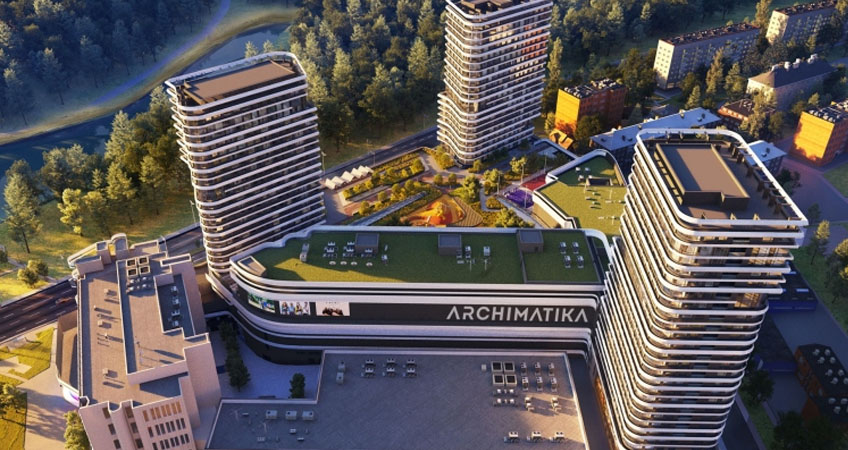 Construction has begun on a housing complex in the south part of Kiev, Ukraine, which proposes to encompass all the functions that its residents may need, from housing stock to movie theaters.  Designed by the architecture duo ARCHIMATIKA, the “White Lines” scheme unites three visually distinct volumes into a single living development based on comfortability and convenience.

The project site is located at the fork of Holoseevsky Avenue and Vasilkovskaya Street. Limited from the west by the Uzhgorodsky Lane, the scheme spans a triangular plot near the Holoseevsky Forest Park proximity and the Holoseevskaya metro station.

The development’s three 24-story towers rest on a two-story podium, at the corners of the site. The podium is planned to contain sports and entertainment functions, while its roof will be used as the private landscaped yard, which is only accessible to the residents of the complex. The first floor will also include a 31,000-square meter shopping arcade, which will face the city entrance to the complex. “Today, there is a totally dead area there,” Dmitry Vasiliev, cofounder of ARCHIMATIKA explains. “People who walk down the avenue to their homes from the metro station have to walk alongside a dead concrete fence – a waste of time and space, really. We, on the other hand, want to make a living street with shops, cafes, and drugstores – everything that may come in handy, not only for the residents of our complex, but the whole area as well.”

In order to unify the visibility and design of the glass towers, the complex’s façade features a “white thread” wound around the exterior in varying widths. Covering the podium, as well as the height of the buildings, the white lines additionally conceal residential units’ air conditioning units. This unique design motivated the renaming of the complex, which was formerly known as Smart Plaza Holoseevo.

The architects are proposing to replace the strictly rectangular floor plans with parallelograms with rounded corners that take on a wave shape alongside one of the walls. This appearance is also strengthened by the nonlinear outlines of the awnings of the shopping gallery, which look like fungi that grow on old tree trunks.

For more on this story, go to Archi Russia and White Lines.