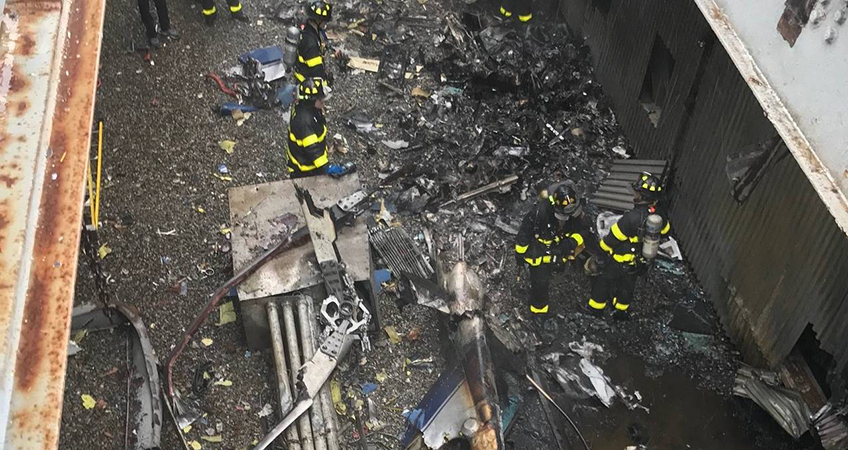 A helicopter crash-landed atop a 51-story office tower in Midtown Manhattan, killing the pilot, clogging the skyscraper’s stairwells with thousands of evacuating workers and sending police and fire units racing through rainy streets to the tightly packed heart of the nation’s most populous city.

People on higher floors said they heard a whining sound and then an explosion that sent a shudder through the building, which is on Seventh Avenue between West 51st and West 52nd streets. The silence that followed was overtaken by the wail of sirens as emergency vehicles responded. Some believed it was an earthquake. Others’ thoughts immediately went to the Sept. 11, 2001, terrorist attacks. From the office windows, debris could be seen falling from above.

Instead, it was a privately-owned helicopter that had taken off from the East 34th Street Heliport and pulled off what officials called a “hard landing” 11 minutes later. No injuries to anyone in the building or on the ground were reported.

“This could have been a much worse incident, and thank God no other people were injured in this absolutely shocking, stunning incident,” Mayor Bill de Blasio said.

“The helicopter was attempting to land, and it landed at quite a high rate of speed,” a New York Police Department spokesman said. NYPD officials wouldn’t say where the helicopter was going. Officials believe the pilot was headed to the helicopter’s home airport in New Jersey, but they were still investigating.

The pilot, Timothy McCormack, worked for Daniele Bodini, the founder of real estate firm American Continental Properties Group and a former ambassador of the Republic of San Marino to the United Nations. A lawyer for Mr. Bodini didn’t immediately respond to calls and emails for comment. Mr. McCormack typically flew Mr. Bodini’s helicopter out of its base at Linden Airport in New Jersey. Paul Dudley, the airport’s manager, said Mr. McCormack was an experienced and respected pilot. “Something really unusually brutal must have overtaken him in terms of weather or of possible mechanical failure,” said Mr. Dudley, who is also a pilot.

Mr. Dudley said pilots who encounter difficulties around New York City usually head for the Hudson River or the East River to make an emergency landing. The fact that the pilot wound up over Midtown suggests he had no choice. “When there is no place to go, you end up on a rooftop,” he said.

“Pilots who encounter difficulties around New York City usually head for the Hudson River or the East River to make an emergency landing. The fact that the pilot wound up over Midtown suggests he had no choice.”

New York Gov. Andrew Cuomo, who came to the scene from an event about 2 miles (3.2 kilometers) away, said there was no initial indication that the event was related to terrorism. “If you’re a New Yorker, you have a level of PTSD from 9/11,” Mr. Cuomo said on hearing about the crash. “At this point there’s no indication that that is the case.”

The area where the helicopter crash-landed has been under a flight restriction since President Trump took office because of its proximity to Trump Tower. The restriction bans aircraft from flying under 3,000 feet (914 meters) in a 1-mile (1.6-kilometer) radius of the president’s Fifth Avenue property.

The National Transportation Safety Board said it would investigate the incident. It isn’t clear whether Monday’s fog and sheets of rain were factors.

Helicopter pilots need permission from air-traffic control to fly over most of Manhattan, according to Federal Aviation Administration rules. But a pilot taking off from the East 34th Street Heliport doesn’t have to contact air-traffic control as long as he or she stays below 1,100 feet (335 meters) and follows the East River. The FAA said air-traffic controllers didn’t handle Monday’s flight.

The first 911 calls came in at 1:43 pm, and police and firefighters were at 787 Seventh Ave. in a little over four minutes, New York officials said.

The building houses the Americas headquarters for French banking group BNP Paribas SA, with about 2,000 employees. The chief executive of BNP USA, Jean-Yves Fillion, said he barely had time to grab his bag as employees moved to leave the offices near the very top of the building.

“It reminded me of an earthquake,” he said.

The bank remained fully operational and was in quick contact with regulators. Backup locations will be used until the building reopens.

Mr. Fillion was later able to tour key operational floors in the building with his security team and said there was a lot of water but that the damage didn’t seem extensive.

Mary Beka, a 65-year-old maintenance worker in the building, was in the basement taking lunch when the helicopter landed. Not knowing what happened, she tried to call an elevator—first a normal one, then the freight. When she realized neither were working, she went to the stairs and called security, who told her to evacuate.

“I started panicking and crying, thinking something was going to happen to me,” she said.

Ms. Beka texted her 18-year-old grandson that something was wrong and exited the building. She waited in the rain in front of the nearby Sheraton hotel with other maintenance workers who hadn’t been inside and were waiting to begin their shifts.

As employees were evacuated, police at the scene asked passersby to move two blocks away from the building, which also houses investment firm Keefe, Bruyette & Woods and law firms Sidley Austin and Willkie Farr & Gallagher.

Livery car driver Nicolas Estevez, of New Jersey, was chatting with a friend on the sidewalk directly across the street from the AXA Equitable building when he heard an explosion.

A foot-long (0.3-meter) piece of twisted, lightweight metal, resembling aluminum, fell about five feet from his parked SUV, he said. “We were so lucky,” he said.

Steve Ahn, an associate at a law firm in the building, was returning from lunch with colleagues at Mastro’s Steakhouse moments after the incident. As people rushed out of the building through an atrium near Sixth Avenue, Mr. Ahn said he overheard employees theorizing about what may have happened. One person thought an airplane had grazed the side of the building, he said, and another thought it was an earthquake.

It took Nathan Hutton, who works for the IT department at BNP, half an hour to get from the 29th floor down to the ground floor. “There were just too many people, it was too crowded. And everybody was trying to get off of all the floors at the same time,” said Mr. Hutton, 59 years old.

With rain pouring down over the scene, people also emptied out of surrounding office buildings, trying to catch a glimpse of the crash and learn more details. Fog covered the tops of most Midtown buildings, including the site of the crash. Umbrella and poncho sellers did a steady business, as police tried to clear the area and emergency vehicles whizzed past.

Firefighters made their way to the roof, where they quickly extinguished a fire and worked to contain fuel leaking from the helicopter. The building is the tallest in the area that spans 6th and 8th Avenues from 43rd to 55th Streets, but not by much, according to the Council on Tall Buildings and Urban Habitat.

The White House said the president was briefed on the crash and monitoring the situation. Mr. Trump called Mr. Cuomo while the governor was at the scene to ask about the incident and offer assistance, an aide to Mr. Cuomo said in a statement.

A fire broke out after an “emergency or a hard landing” on the roof of the skyscraper.

Police at the scene were asking passersby to move two blocks away from the building.

A spokesman for New York City Department of Buildings said it had sent a team to inspect the office building to make sure it is structurally safe.

The building, near Rockefeller Center, is owned by the California Public Employees’ Retirement System, more commonly known as Calpers. Calpers said in a statement it was monitoring the situation and declined to comment further.

For more on this story, go to the Wall Street Journal.