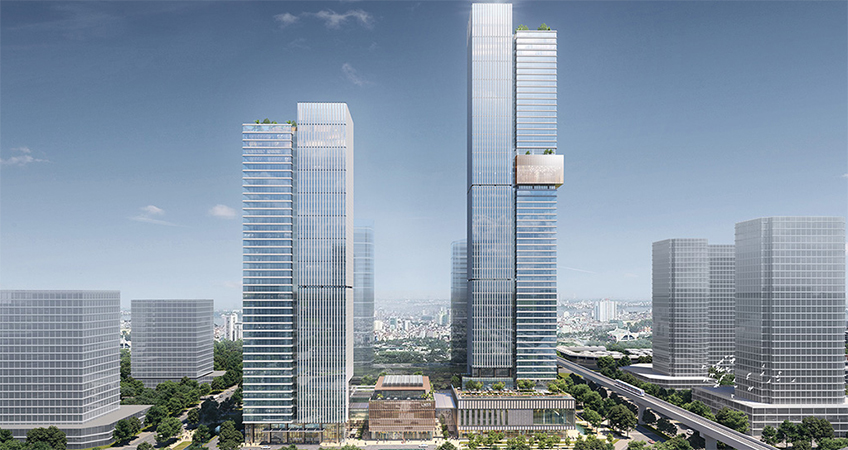 The development will include both a hotel and a condominium tower, with a four-story retail tower located between them. (c) 10 Design.
28 April 2021 | Hanoi, Vietnam

10 Design have won Vietnam’s Landmark 55 competition with a two-tower proposal. The 178,888-square-meter development, in Hanoi’s Starlake district, includes a 55-story hotel and condominium hotel tower with a sky-lobby and a 41-story office tower. A four-story retail pavilion is located between both towers in the middle of the site, with an active food and beverage roof garden and a hotel amenity terrace that’s accessible across the development. Ground-level plazas and pedestrian streets, lined with both retail and restaurants, are located at both edges of the central retail pavilion.

"Whilst the plots of the new district are typically being developed as "traditionally" isolated podium and tower compositions, we looked at developing this plot as a connective catalyst for the region that would function on a number of contextual scales, locale, neighborhood, district and city." -Leonard Milford, Design Partner, 10 Design

The site is governed by the two towers which have been constructed to optimize the views to the West Lake and provide street addresses that both the office and hotel require, for the ease of services such as deliveries. The skyline from the city center is articulated by a cantilevering lobby for the hotel directing views out across West Lake and beyond as a new belvedere for the city.

The lower volumes of the towers have been massed to create a more intimate and refined pedestrian orientated place within the district. The central building sits in an avenue of activity leading from the main street frontage and then opens onto the central park at the north of the plot; this provides a shaded and human scale of activity, and the massing between the towers creates clear access to the roof scape forming extensions of the public park.

For more on this story, go to World Architecture News.