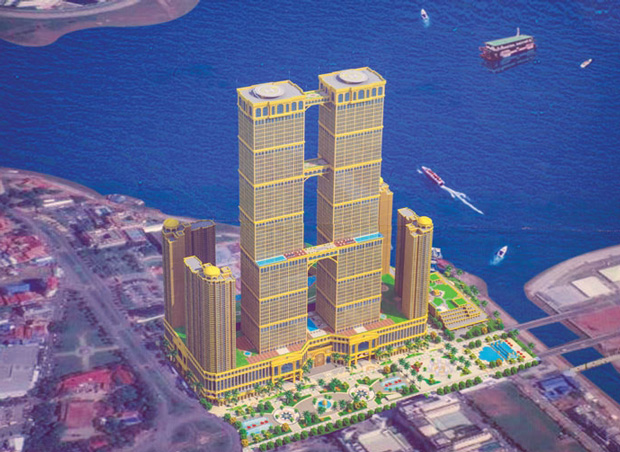 Initial construction work on the Thai Boon Roong Twin Towers World Trade Center in Phnom Penh began on March 20, according to an official who helped design the project.

Composed of two 133-story skyscrapers, the project will cover a five-hectare block of land opposite NagaWorld.

Tous Saphoeun, dean of the Architecture and Urban Planning Department at Pannasastra University, explained that the work centered on preparing the site for the upcoming development.

He said this first phase of construction has been hastened in order to meet concerns from the design and architecture teams, who wanted to make sure the project stays on schedule.

“This is the first, unofficial groundbreaking event for the project. It will help prevent landslides during construction of the project,” said Mr. Saphoeun.

“From here on, it will take about a year to finish the buildings. An official announcement for the project’s groundbreaking will be made later. There will be a big event to celebrate it,” he added.

Mr. Saphoeun said it will cost about $3 billion to raise the structure.

The project will include luxury condominiums, apartments, international offices, restaurants, and sport facilities, as well as a five-star hotel and a modern mall.

“When this trade center is completed, it will be a symbol of the development of the whole of Cambodia. It will increase the prestige of the country on the international stage.

For more on this story, go to the Khmer Times.