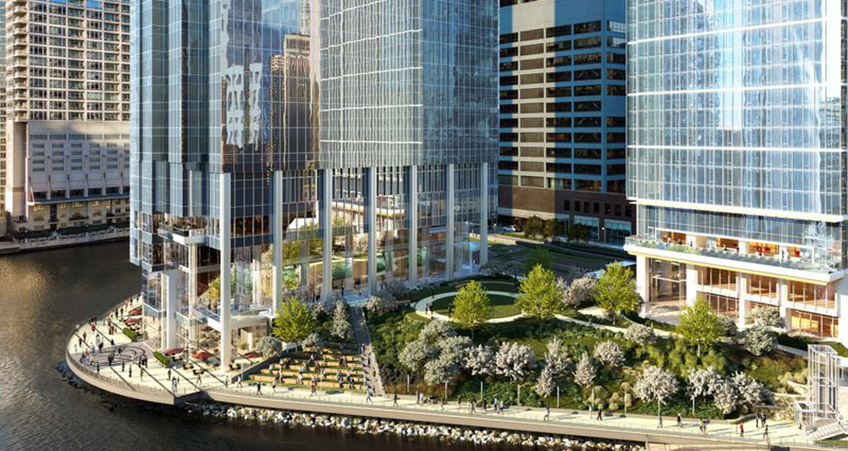 Work on the skyscraper’s foundation is underway at the site at Orleans Street and the river.
23 April 2020 | Chicago, United States

Development of the 60-story Salesforce Tower has kicked off along the Chicago River after the project secured a US$500 million-plus construction loan that is one of the largest in Chicago history.

Financing was finalized amid a major economic slowdown resulting from the coronavirus pandemic, which has put into question the fates of big real estate projects throughout the world.

Salesforce Tower was able to move forward because of its investors and a 500,000-square-foot (46,451-square-meter) lease in hand from the namesake tenant, the San Francisco-based software firm.

The loan was finalized April 2, 2020 said Greg Van Schaack, a Chicago-based senior managing director at development firm Hines. Work to prepare the site for upcoming foundation work began a day or two later on the site at Orleans Street and the Chicago River, he said.

Hines is developing the site with the Kennedy family, which has owned the riverfront land for decades; Chicago businessman Larry Levy; and the AFL-CIO Building Investment Trust, which is advised by PNC Realty Investors.

Lenders included JPMorgan Chase, Wells Fargo and U.S. Bank, among others, according to Van Schaack.

He said the loan is for more than US$500 million, but Van Schaack declined to be more specific. The exact amount was not yet recorded with Cook County.

“It’s a tough time for any project that has smaller investors distracted by other issues,” Van Schaack said. “With the lenders and investors that we have, we were able to stay on course. We’re very lucky for that.”

It is the largest loan since 2017, which included a Chicago-record $700 million in debt for the 101-story Vista Tower condominium and hotel project expected to open later this year, and a US$500 million loan for the Old Post Office redevelopment that opened to the first office tenants in late 2019.

Salesforce in November 2018 confirmed plans to anchor the riverfront tower, saying it had leased floors five through 23 and 55 through 57, in a consolidation of spaces in several River North and Loop office buildings it occupies now.

The company expects to pay US$475 million in rent over 17 years in the new tower, according to a filing with the Securities and Exchange Commission.

Salesforce Tower is expected to cost more than US$800 million to build.

It is the third and final tower to be built on the Wolf Point site near the Merchandise Mart on the north banks of the river. The second of two apartment towers, the 60-story Wolf Point East, is open to residents while construction work is completed within the top 20 floors. Wolf Point West opened in January 2016.

The long-term impact of the health crisis on commercial restate is uncertain, but it’s expected to delay many leasing decisions in the months to come. But the tower’s foundation work will take at least six months to complete, and the hope is that the downtown office market will reemerge by late this year, Van Schaack said.

“Short term, I think things are going to be very bumpy, with tenants reassessing their needs,” Van Schaack said. “But this building won’t be ready for two to three years, and I think by then things will be back to normal.