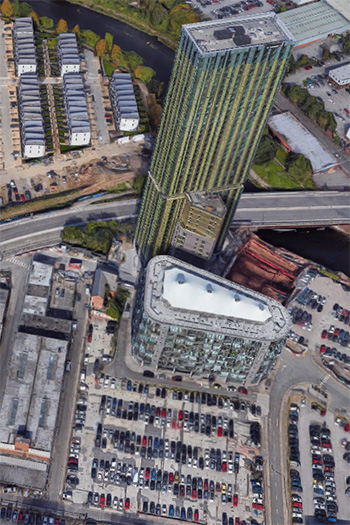 Details have emerged of the latest tower to be proposed by Renaker Build at Greengate: a 50-story skyscraper made up of more than 500 apartments, the prolific developer’s joint second-highest tower in Greater Manchester.

News was revealed in late September 2019 that Renaker Build was preparing a hybrid planning application covering development at Salford’s Greengate, including the phased delivery of a public park and three tall residential buildings.

The first phase of the scheme would be on the Total car park next to the Abito building, and would see the creation of the park and a residential tower.

On 4 October, 2019, a planning document was registered with Salford City Council that said the scheme would be 50 stories tall and include 559 apartments, as well as low-level commercial space.

The second and third phases, which would be part of an outline planning application, would be constructed on land around Collier Street and Greengate, fronting Trinity Way. OMI Architects is advising.

The details have emerged following the circulation of a public consultation leaflet, which kept specifics vague but promoted an information event due to be held on Thursday 10 October 2019 from 3:30 pm to 7:00 pm at the former Aldridge Building on Salford’s Queen Street.

The scheme would be the latest of many projects Renaker is progressing as part of the large-scale Greengate master plan. Completed projects include The Anaconda Cut and One Greengate.

Nearby, proposals are coming forward from One Heritage, advised by OMI and Euan Kellie Property Solutions, for a tower on a car park at Greengate and New Bridge. Sitting at 55 stories, the building would sit alongside Renaker’s 44-story Anaconda Cut, and would be the tallest property in Salford.

At Deansgate Square in Manchester, Renaker has been on-site for the last two years developing a skyscraper cluster, with four buildings of 66, 52, 47, and 39.

For more on this story, go to Place Northwest.