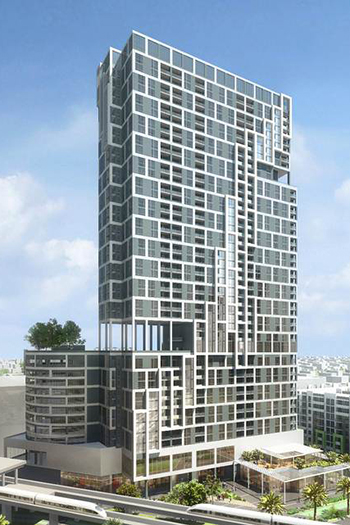 The developers at a massive mixed-use project along U.S. Highway 1 just closed on a US$99 million construction loan for Tower II of the Link at Douglas complex.

13th Floor Investments and Adler Group secured the loan from Banco Santander and TD Bank for the 36-story, 421-unit apartment tower, according to the developers. The building, designed by Arquitectonica, will also have about 17,000 square feet (1,600 square meters) of ground-floor retail space.

The 7-acre (2.8-hectare) project, at the northwest corner of U.S. 1 and Douglas Road, is one of four major mixed-use developments in the pipeline in the areas of Coral Gables, South Miami, and Coconut Grove. They include Gables Station and Paseo de la Riviera, both being developed by Nolan Reynolds International and Terra and Grass River Property’s Grove Central.

The Link at Douglas, which is being built next to Miami-Dade County’s Douglas Road Metrorail station at 3100 Douglas Road, broke ground in July 2019 with a US$47 million loan from TD Bank. Tower I, a 22-story, 312-unit building, is expected to be delivered in 2021. It will have 6,000 square feet (560 square meters) of retail space and was designed by Corwil Architects.

The transit-oriented project will connect to the Underline, a 10-mile-long linear park that runs underneath the Metrorail tracks from Dadeland to Brickell.

The second building at the Link at Douglas is expected to be completed by the end of 2022, with construction expected to begin in February 2020.

The multi-phased development will eventually have a total of 1,500 residential units, including a workforce housing component; 25,000 square feet (2,300 square meters) of retail space; and a 250,000-square-foot (23,000-square-meter) office building. About 100 of the 733 units built in the first and second phases are expected to be designated as workforce housing units.

13th Floor and Adler have a ground lease with the county to develop the project. They are funding US$17 million in public infrastructure improvements, including renovating the Metrorail station, building a public plaza and funding a portion of the Underline.

The developers also partnered to build Motion at Dadeland, a 294-unit transit-oriented rental tower next to the Dadeland North Metrorail Station, which was completed in April 2019. Link at Douglas, Tower I