Drones to be Used for Surveillance of Planned London Towers 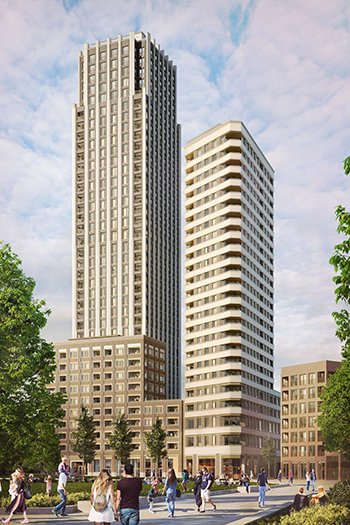 Contractor John Sisk and Son is to use a fleet of drones to carry out quality checks on the external structure of PRP-designed tower schemes at Wembley Park.

Sisk project manager Darragh Nunan said the drones would remove the need to put up scaffolding for workers to examine the external panels of the structure.

“This is a trial we will be doing for E05. We could have a drone fly up there, check the panel for any damage and then come back down,” said Sisk.

“It would remove the need to erect a scaffold up the 24 stories of the building or have suspended cradles to perform the checks,” Sisk added.

The contractor currently has a fleet of six drones, which cost about £500 (US$647) each.

Sisk BIM engineer David Vater said he would soon be taking his test to obtain a license to fly the drones. “It’s similar to flying [an aircraft], you need to pass a theory test to make sure you understand all the air laws, and then you have a practical test.”

“When you fly a drone, you have to alert the owner of the site and whoever owns the air space above you, and then clear the entire site because no one’s allowed underneath it,” he added.

Vater said that the Heathrow flight path would be the closest airspace in the case of Wembley Park.

Nunan also revealed that Sisk’s Wembley Park sites have been regularly targeted by urban explorers. The whole development is now covered by an injunction, obtained by Quintain in December 2018.

“There were guys attempting to climb cranes. We had a few people who would be at the hoardings trying to break in, so we stepped up all our safety measures and security. Since the injunction, the situation seems to be better,” said Vater.

PRP was novated to Sisk on the award of the design-build contract for the job, having been reserved for the scheme in 2017.