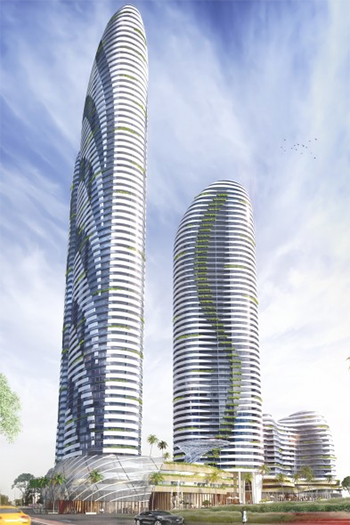 Four towers (with heights ranging from 18 stories to 71 stories) will be built in Southport after gaining approval from the Gold Coast City Council.
28 February 2020 | Gold Coast, Australia

Only one submission was made against the proposal relating to traffic impacts for access to a neighboring property.

Council officers also noted traffic concerns for the area with infrastructure updates and sewerage improvements earmarked for site which sits within the Southport Priority Development Area.

Council said they would provide AU$4.9 million (US$3.1 million) toward the upgrade of the sewerage system however the final estimated infrastructure charge for the development is expected to cost AU$26.8 million (US$16.9 million).

The developers previously planned 1,500 dwellings on the site across five towers however this was changed after pre-lodgement meetings with council officers.

Aland also has plans for a 366-apartment tower at 16 Parkes Street, Parramatta which they purchased from Singapore-listed CWG International for AU$40 million (US$26 million) in late 2017.

They also own Peak Towers which was located next door to the plagued Mascot Towers.

The Southport development would occur over four stages starting with the shortest tower at 18-stories and a podium.

Stage two will include a 50-story tower, basement garage and the rest of commercial space before the final stage commenced with the construction of a 62-story and 71-story tower.

For more on this story, go to Urban Developer.