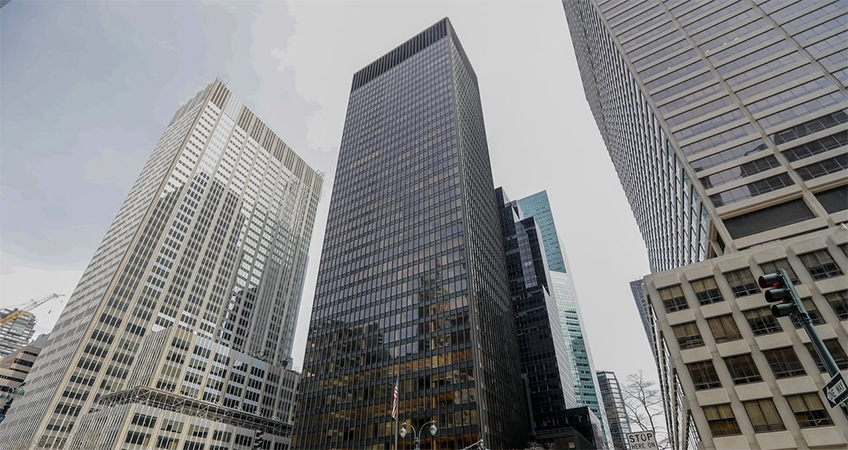 RFR’s plan to freshen up the Seagram Building is a reminder of how much the office market has been undergoing change. Image Credit: Peter J. Smith for The Wall Street Journal.
06 July 2020 | New York City, United States

The owner of the Seagram Building, the stately office tower designed by Ludwig Mies van der Rohe on Manhattan’s Park Avenue, thinks it is time for the famed landmark to loosen up a bit.

That is a big reason why Mr. Rosen said he is creating the Seagram Playground, a 35,000-square-foot (3,251-square-meter) enclosed area underneath the building’s plaza that currently serves as a parking garage.

The Playground is meant to encourage team building or just unwinding. It will include a climbing wall, basketball courts, yoga and spinning studios, indoor track, weight room and a boxing ring, said Mr. Rosen, a kickboxing enthusiast. It will also include retractable stadium-style benches that when open can host meetings for up to 200 employees.

"We check all the boxes for the CEOs, and the guys who want the high end," said Mr. Rosen, referring to the Seagram’s status as an architectural marvel of the International Style. "But we were missing something that would cater to the junior partners."

His New York-based real-estate firm, RFR Holding LLC, is investing US$25 million in the project. Mr. Rosen expects to begin construction by year’s end and complete the Playground about a year and a half later. Because the garage doesn’t have a landmark designation, it will not have to get city preservation committee approval for the changes.

RFR’s plan to freshen up the historic property is a reminder of how much the office market has been undergoing change, even before the coronavirus pandemic led many companies to rethink their office use and consider more remote work. Co-working firms brought in more amenities like free food and beer, while newer buildings feature private fitness centers, more outdoor space and greater energy efficiency.

The Seagram landlord is hoping the Playground will help fill the space left by Wells Fargo & Co., which occupied floors 2 through 10 at the Seagram Building and departed recently for the new Hudson Yards development on Manhattan’s far West Side.

Mr. Rosen said he would have created the Playground even if Wells Fargo had renewed its lease.

"We wanted to do something with the garage anyhow, and something of size and magnitude," he said during an interview at his office last week, where he showed up tanned and dressed casually in a navy blue polo shirt. His white hair was nearly shoulder length, despite what he said was a recent haircut.

He has other potential plans to keep tenants engaged, including the prospect of placing cafe tables on Seagram’s Park Avenue-facing plaza space, now that the city has cut through much of the red tape for outdoor dining permits to encourage seating outside.

Like other property firms, RFR felt it had to set an example and have employees return to the office during the first week New York City reopened this month. Building owners hoped the workers’ return would help underscore what they say is the primacy of office life and face-to-face meetings.

RFR recently relocated its own headquarters to the Seagram Building, moving from the nearby Lever House building after the firm gave up control of that property. Nearly all of RFR’s 60 New York employees were at the office last week, though only about 20 percent of the building’s employees overall were back at their desks, Mr. Rosen said.

Landlords have had a tougher time collecting rent during Covid-19. Mr. Rosen said that only about 55 to 60 percent of retail tenants across the RFR portfolio of about two dozen buildings paid June rent, though around 90 percent of the office tenants paid.

He thinks recent talk of the end of the office is overrated. While companies are embracing work from home and video meetings through services like Zoom, he thinks executives will find the remote appeal will wear thin as they try to re-create the spark of innovation over a monitor.

"You can fix a problem on Zoom," Mr. Rosen said. "You can’t create something on Zoom."

For more on this story, go to Mansion Global.