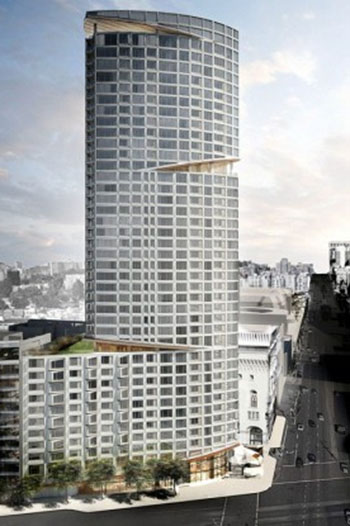 It’s been more than two years since San Francisco City Hall approved the residential 400-foot (122-meter) high-rise, One Oak tower, designed by Oslo-based Snøhetta. But in that time, the project has yet to begin construction, even as similar buildings have sprouted on surrounding blocks.

The developer asked for a two-year extension on their entitlements.

The developer BUILD Inc. hoped to begin construction on the 304-home, 40-story building in 2018, with a completion date of 2019, but have now asked for a two-year extension on their entitlements, which are set to expire in the next six months.

Plans to demolish the All Star Cafe bakery at Van Ness and Market in the Hayes Valley district, along with all other existing buildings on the property, have been put on hold.

The city approved the One Oak project in mid-2017, but at a meeting of the San Francisco Planning Commission, BUILD requested an extension as entitlements are only valid through June of 2020. If the body approves the extension, the developers would have until June of 2022 to get the job done.

The application does not specify what exactly is taking so long, but the high cost of construction in San Francisco in the midst of an intensely competitive building boom is always a likely culprit.

For more on this story go to Curbed San Francisco