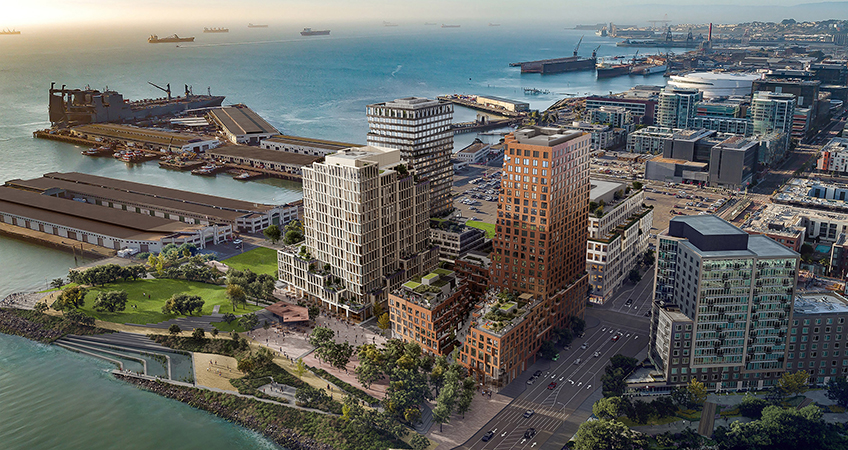 MVRDV, Studio Gang, Henning Larsen, and WORKac are the four firms that have teamed up to design buildings for a new neighborhood called Mission Rock.
23 October 2019 | San Francisco, United States

A canyon-like tower by MVRDV and a twisting structure by Studio Gang are among the buildings to be revealed for a new San Francisco development.

MVRDV, Studio Gang, Henning Larsen, and WORKac are the four firms that have teamed up to design buildings for a new neighborhood called Mission Rock.

The development will be in the Mission Bay neighborhood, on 3rd Street between Terry Francois Boulevard and Mission Rock Street. It will span a 28-acre (11-hectare) waterfront site on San Francisco Bay that is currently used as a parking lot.

MVRDV has proposed a mixed-use tower, Building A, that features a 23-story construction with box-shaped units that project out to form a pixelated effect.

It is nicknamed The Canyon because MVRDV referenced California’s mountains when designing it, with the intention to bring back the city’s hilly topography missing on the flat asphalt plot.

“We wanted to establish a dialogue between the waterfront, the ballpark, and the robust Californian rock formations,” said MVRDV co-founder Nathalie de Vries.

“Those formations inspired The Canyon’s architectural form: steep rocky walls with a narrow valley running between them, thus creating a mix of apartments of different sizes, roof terraces, and lush public spaces which feel welcoming to all.”

The project comprises a central tower as a “canyon” that will “fracture” the north-east podium to make a building form of its own with a lush space at ground level. Another volume, known as the “annex”, will contain a separate lobby on the east side of the building.

At the base of MVRDV’s tower is a podium with a similarly faceted, red exterior. Located here will be retail, office and commercial spaces.

The building will scale 240 feet (73 meters) and contain about 285 residential units. Mechanical equipment will be housed on the roof in an additional 14-foot (4.3-meter) volume, and a rooftop patio, partial basement for bike parking, and space for the district energy system round out the design.

US firm Studio Gang, meanwhile, has conceived a 23-story tower with floors that twist away from one another to create inlets for planted terraces. Ceramics will clad each floor to offer varying hues.

“Building F will be at the heart of Mission Rock, housing amenities for the entire neighborhood that overlook a new public plaza and vibrant streetscape,” said Studio Gang’s founder Jeanne Gang.

“For the residences, we designed a tower inscribed with terraces, extending this indoor-outdoor living, and offering views amidst elevated bio-diverse gardens.”

Like MVRDV, Henning Larsen Architects has taken cues from San Francisco’s hilly terrain for Building G. The lower floors are stepped to create terraces for planting, drawing similarities to Studio Gang’s structure, while the gridded façade extends at the top to form a balustrade around a rooftop garden.

“Contrary to the contemporary trend of sleek all-glass commercial towers, the aesthetic of Mission Rock reflects the historic architecture of industrial San Francisco where tactile materials bring an inviting, comfortable environment and deep facades create a dynamic play of light and shadow throughout the day,” said the Henning Larsen partner and design principal, Louis Becker.

WORKac has created a more linear office building with volumes that form a pixelated exterior. The protrusions are also used to create outdoor areas.

“We thought we could take advantage of all the setbacks at the different levels by carving new openings down the face of the building,” said WORKac co-founder Dan Wood.  “That way every floor has a garden, open to the sky.”

“This a building that reflects the city’s embrace of the outdoor life, so that no matter where you are, you have access to workspace outside,” he added.

Mission Rock encompasses 12 plots, with seven for residential, four commercial and one for parking. A plaza will be located at the center.

The firms worked in unison to “collaboratively design the buildings,” according to a project statement and teamed with local architects. MVRDV worked with Perry Architects, Studio Gang with Quezada Architecture, and the two office buildings were created in collaboration with Adamson Associates and Y.A. Studio.

Construction is slated to commence in early 2020.

The master plan also includes the rehabilitation of San Francisco’s historic Pier 48. A new park will also be included north of the property called China Basin Park. It will be designed by New York landscape architecture studio SCAPE, with local firms Miller and Company and Min Design.

Across the water from the park is the home stadium of the American professional baseball team the San Francisco Giants, called Oracle Park. In 2010, the Giants won the rights to develop the area, currently known as Seawall Lot 337. The team will develop Mission Rock property in collaboration with Tishman Speyer.

Currently, San Francisco is undergoing expansion across its skyline. Several other buildings are proposed for the city, recently completed, or under construction. Examples are The Avery glass tower by OMA, Studio Gang’s spiraling Mira building that topped out in April 2019 and Pelli Clarke Pelli’s monolithic Salesforce Tower that was completed in 2018.