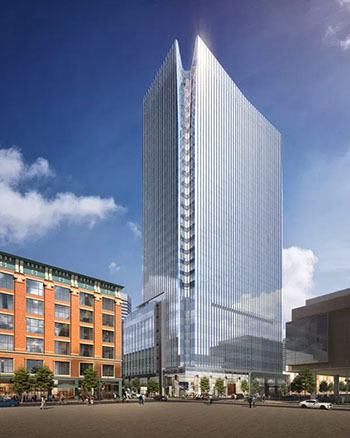 Denver’s skyline reached rarely visited heights in 2018 when the 40-story 1144 Fifteenth office tower opened in March. Topping out at 183-meters (603-feet), it is now the city’s fifth tallest building, assuming you count the spire atop the neighboring Four Seasons tower.

The city experimented with a new vertical frontier, too, but the land deal around a proposed 81-story building fell apart last February. At a projected 304 meters (1,000 feet), that building would have been among Denver’s tallest, blowing by current champion, 218-meter (714-foot) Republic Plaza.

There’s nothing quite of that scale on Denver’s 2019 docket but a 30-story building is under construction now in the heart of downtown. A handful more buildings of that stature or greater are in the city’s planning pipeline. In a town with just 16 towers that crack the 30-story threshold today, these projects — should they all be built as planned — stand to make some visible marks on the urban horizon.

The 30-story Block 162 office building has been in the works since at least early 2016. That’s when Houston-based developer the Patrinely Group announced it was partnering with the property’s owner, local real estate mogul Evan Makovsky, to bring new life to a stagnant patch of prime downtown land that was once home to the storied 15th Street Tavern but more recently hosted a community garden and a sea of parking spots.

Crews broke ground on Block 162 in June. Foundation work is complete, and things are set to get vertical this year on the 138-meter (452-foot) tower that will take up the entire north side of 15th between Welton and California streets. When it’s done likely around the end of 2020 Block 162 will be Denver’s 11th tallest building.

Block 162 will seek to attract office users with its proximity to light rail lines, a column-free design that will provide 360-degree views and plentiful natural light on every office level and a “sky terrace” on the 11th floor featuring an outdoor lounge with fireplaces and an “activity lawn” where gym users can take their workouts outside. The ground floor will have a large lobby facing 15th Street and three retail spaces.

Patrinely is working with architecture firms Gensler and studio Insite on the project. Swinerton Builders is the general contractor and Cushman & Wakefield brokers Doug Wulf and Todd Wheeler have been tapped to handle leasing.

Also, under construction in Denver is Bell Park, a pair of triangular parking lots bounded by Speer Boulevard, 14th, Larimer and Market streets and bisected by Cherry Creek — for the last 18 years has belonged to Buzz Geller, the owner of Paradise Land Co. and a well-known face in Denver real estate.

Pre-Great Recession, Geller and partners had planned to build a luxury high-rise containing full-floor, $10 million condos on the triangle closest to Speer. By the time the project got necessary approvals, however, the economy had collapsed, and the plans were scrapped.

The new project appears to be aimed at a broader client base. According to concept plans, project partner Kairoi Residential submitted to the city in December, the 36-story tower would contain 169 apartments or condos, along with 255 underground parking spaces, a pool and a variety of amenities. The plans indicate the building would be 124 meters (408 feet) tall, good for a tie for the 16th tallest building in Denver.

A pair of condo towers sitting atop a shared parking pedestal are also under city review now.

The project is thus far known as Block 176 and would top out at 38 stories and 122 meters (400 feet) on a parcel that touches Broadway, 18th Street and Glenarm Place. The plans, submitted in November of 2018 by the property owner, Canadian development firm Amacon, call for 477 condos and 530 parking spaces in what would be Denver’s 18th tallest building.

For more on this story visit the Denver Post.