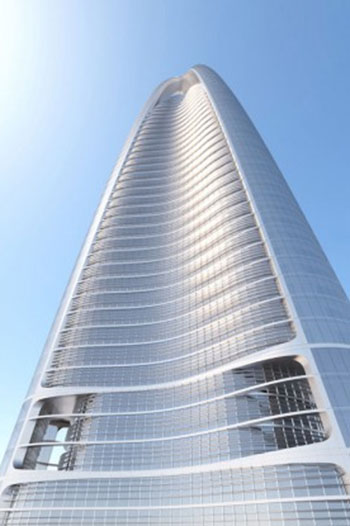 A subsidiary of China’s largest construction group has suspended work on one of the nation’s tallest skyscrapers after the developer became the latest in a string of companies to default on a payment. The default highlights the growing challenges faced by China’s construction groups as the slowing economy trims credit supply, putting the once runaway mega-tower building boom under stress.

In an October 30 letter, China Construction Third Engineering Bureau Company (CCTEBC) said it would halt construction on the 476-meter-high Greenland Center in the central city of Wuhan. It said Greenland Group, one of the nation’s largest property companies, had failed to make “a significant” project payment.

“Unfinished supertall skyscrapers, which cost a huge amount of funds to build, are a typical sign of economic recession,” said Yan Yuejin, an analyst at Shanghai-based E-house China Research and Development Institution. “They are financed by credit and will run into trouble when lenders begin to scale back.”

China reported a year-on-year economic growth of six percent in the third quarter, its slowest pace in 30 years. Other cash-strapped property developers have also been struggling to keep their tall-building projects afloat. Construction of more than a dozen super tall skyscrapers, defined as buildings higher than 300 meters, have been postponed or are behind schedule.

Among them is the Zhongnan Center in the eastern city of Suzhou. Construction of the 729-meter skyscraper would make it the second-highest in the world if it were ever completed, but building work stalled shortly after construction began in 2015. “The most rational choice for us is to construct at a slow pace until the market recovers,” said an official at Zhongnan Group, developer of the Suzhou project.

An official at Greenland, which has developed dozens of skyscrapers across the country, stated that the company had worked out a plan with CCTEBC and construction would resume soon. The Wuhan City Government had already asked Greenland to trim the height of the structure.

If the Wuhan Greenland Center construction does proceed, it still faces an uncertain future. Office buildings in Wuhan reported a 36.2 percent vacancy rate, a near-record high, in the third quarter of this year, according to Jones Lang LaSalle, which expects the ratio to keep rising as anticipated new supply floods in.

“Demand for office space has weakened considerably due to the slowing economy,” said Cherry Hu, an analyst at Cushman & Wakefield in Wuhan. “The situation is not going to improve any time soon.”

Li Guozheng, an analyst at China Index Academy, a property consultancy, said Greenland faced a dilemma. “You can’t give up on the project because you have already invested heavily in it…But if you go ahead, you run the risk of not being able to find renters while having to pay sky-high maintenance bills.”

Until recently, Greenland had been able to rely on selling expensive residential apartments, which it would develop adjacent to its multi-use mega buildings, to insure itself against any potential losses from empty office space. The strategy, however, is under pressure as sales of luxury homes have fallen off owing to the cooling economy and a crackdown on housing speculation. “There is a fundamental problem with Greenland’s business model,” said Li Guozheng, “It doesn’t take into account an economic downturn.”

For more on this story go to The Financial Times. (Subscription required)