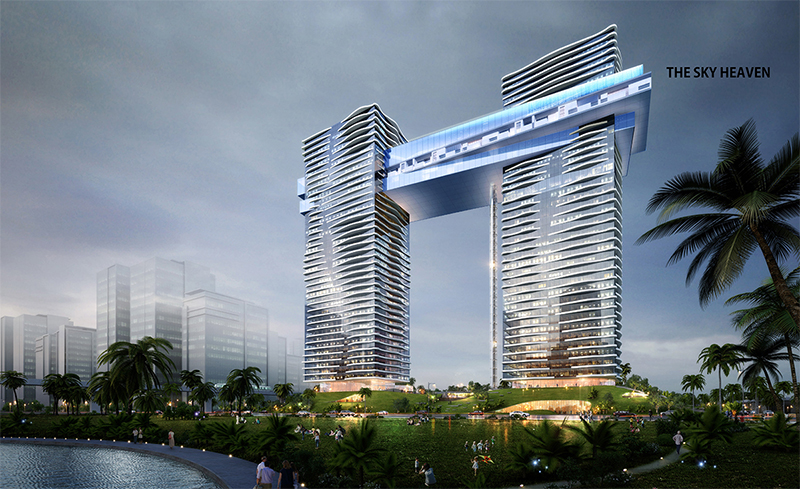 The project, ordered by Sunkyung E&C Group, calls for constructing two towers, connected by a skybridge.
26 May 2020 Hanoi, Vietnam

Lotte E&C has won the 350 billion-won (US$284 million) project for The Heaven mixed-use complex in Hanoi.

The project, ordered by Sunkyung E&C Group, calls for constructing two east and west towers, with each having 40 floors above ground and three below. The 164-meter-tall development will also have a gross floor area of 77,448 square meters, a 333-room hotel, 317 serviced apartments, along with offices and retail.

The project is to be launched in October 2020 and is expected to be completed in 40 months. Sunkyung E&C Group has a record of implementing South Korea’s largest distribution center project. The edifice, with a six-story sky bridge connecting an infinity pool on the tops of the two buildings, is expected to emerge as a new landmark in Hanoi.

The Lotte Center Hanoi was the developer’s most significant prior project in Vietnam. The contractor is now implementing the Lotte Mall Hanoi Project, a large multi-purpose commercial development project in Hanoi, and Lotte Eco Smart City Project in Ho Chi Minh City. Lotte E&C has also successfully completed the Kota Kasablanka Project Phase Two, a 43-story apartment edifice in Jakarta, Indonesia. The contractor was awarded a project to build a new headquarters building for Sathapana Bank in Phnom Penh, Cambodia, in 2018. It is the first time that Lotte E&C won a construction project in Cambodia. The 19-story building with four basements that commands a floor area of 33,135 square meters is to be dedicated in August 2020.

Lotte E&C is also accelerating efforts to expand its presence in the overseas residential housing development business. The contractor began to implement property development projects in earnest in 2018. Lotte E&C is engaged in a few projects, including the FLC Premier Park Development Project, a plan to build 870 apartment units and 870 villa and townhouse units in Hanoi, and the Garden City New East Phase II Project in Jakarta, a project to build 3,300 apartment units.

A Lotte E&C official said Lotte E&C landed the latest order via competitive bidding, and the contractor’s winning the project was attributable to Lotte E&C’s managing to satisfy the order’s needs by providing diverse proposals covering pre-construction and value engineering.

For more on this story, go to News World.