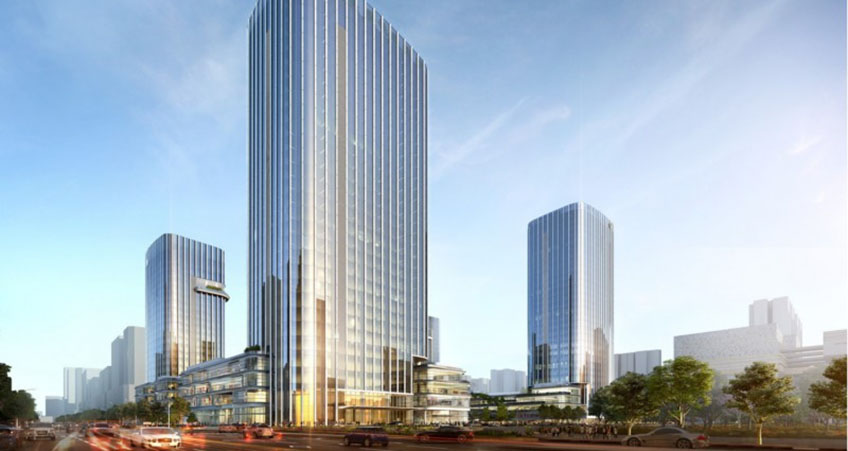 Fronting a large civic plaza and straddling a linear park running through the Huadu CBD, the 273,300-square-meter project, developed by Poly Real Estate Group, is anchored by four towers and features 12 independent office “villas” designed to provide an intimate scale that is unusual for a development of this size.

With direct connections to mass transit, the development is designed to achieve a China Green Building 2-Star rating and will showcase timeless material selections, high-performance building systems, and abundant green roofs, in addition to the optimized site organization.

The two southernmost towers create a gateway to the new CBD and provide an identifiable backdrop for the adjacent civic plaza. The office villas feature a variety of small footprints that step from two stories on the park side to four at the perimeter. Terraces with landscaping occupy each step, extending the park and effectively integrating it visually into the buildings themselves.

“”Pedestrian bridges on the second and third floors connect the office villas, facilitating social interactions both horizontally and vertically throughout the development, emphasizing an organic environment with a human focus.”

Pedestrian bridges on the second and third floors connect the office villas, facilitating social interactions both horizontally and vertically throughout the development, emphasizing an organic environment with a human focus.

“Viewed from outside, the Poly IFC design presents a distinctly urban aesthetic, with active street-level pedestrian and vehicular integration,” says Vladmir Andrejevic, AIA, principal and senior designer with GP. “The internal face is organic and serene by contrast, and is designed to integrate closely with the central park. Each amenity space flows into the next, encouraging users to explore, while offering a respite from the urban condition.”

“We’re proud to be a part of the development of this world-class financial center,” says James Zheng, AIA, LEED AP, co-CEO and president of GP. “As with all of our major mixed-use and office projects worldwide, we are striving with the design of Poly IFC to meet an international standard of design and sophistication that will help drive local and regional economic activity.”

The Poly IFC is expected to begin occupancy sometime in 2021.

For more on this story go to Goettsch Partners.