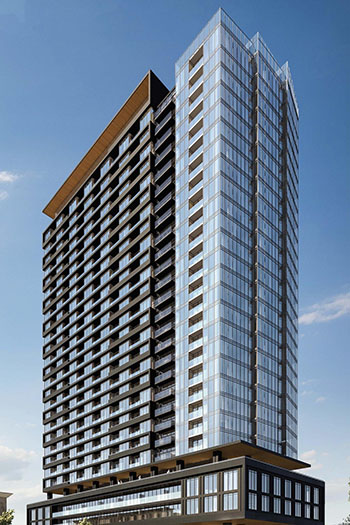 The project will bring 481 new condominium units, along with a grocery retailer, to the east end of Liberty Village.
05 September 2019 Toronto, Canada

Since the January 2018 start of construction, CentreCourt’s ZEN King West project has been progressing. Upon completion, the project will bring 481 new condominium units, along with a grocery retailer, to the east end of Liberty Village, one of the Toronto’s fastest-growing neighborhoods.

The tower is now approximately halfway up, with crews currently forming the 14 and 15th levels. The remaining 16 residential levels and the mechanical penthouse level above will bring the tower to its final 103-meter height. With a pair of tower cranes working at the current rate of forming, the building should top off early in 2020.

Cladding installation is now progressing, with the building being finished in a window wall system consisting of floor-to-ceiling reflective vision glazing and dark spandrel panels, framed in black aluminum. The cladding is now covering the majority of the podium levels, as well as much of the first tower floor plate above.