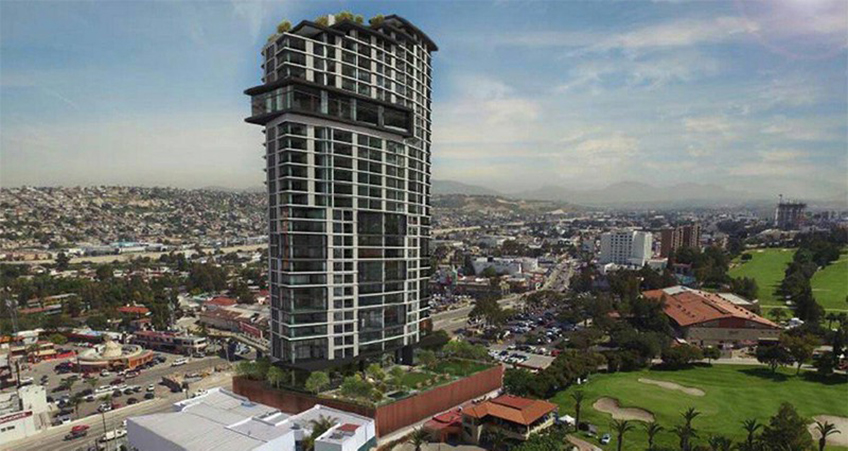 The US$40 million, 32-story Sayan complex is one of Tijuana's most ambitious projects in recent years.
09 March 2020 Tijuana, Mexico

Construction on Tijuana’s largest-ever building Sayan Campestre, at 406 feet (124 meters), is close to completion after two and a half years. Condo prices will reach up to US$1.35 million.

Sayan Campestre is one of five major condo projects opening in the city in 2020, totaling around 330 residential units.

Tijuana has been awash in new condos since about 2016 when developers returned with gusto after years of little to no residential construction. The building has led to a major transformation of the city’s skyline, which only had a handful of buildings taller than 10 stories just 20 years ago. Developers and buyers have not shied away from the city even as crime and murder numbers dominate much of the discussion around Tijuana.

The US$40 million, 32-story Sayan complex is arguably one of the most ambitious projects since the building boom began, and required considerable manpower, roughly 500 workers a day, and meant looking outside of Tijuana for help.

Developer Sayan, based in Nayarit, shipped in workers from all over Mexico, primarily Puebla, Acapulco, and Chiapas, and is paying their rent in East Tijuana.

The most expensive are 3,896-square-feet (362-square-meter) units that cost US$1.35 million. Many of the more expensive units have elevators that go directly to individual condos from the lobby.

According to design director, Karen Lagos, that the beauty of the project is residents don’t need to leave if they don’t want to. There will be a bar and restaurant that is only for residents, a salon, a two-story gym, a clubhouse for private events, pet yard, daycare for children, 24-hour security, and outdoor common areas.

Lagos was raised in Tijuana, and said she loves the city, but admits life at Sayan Campestre seems like a different world from the busy Mexican city just outside its doors.

“You feel like you are somewhere else,” she said.

Views in higher units, and from the 21st-floor pool and spa area, stretch all the way to San Diego with Cabrillo National Monument and downtown visible on a clear day.

Javier Michel Payan Mendez, a manager with Tijuana-based financial firm Unifin Financiera, said it’s possible that only 2 percent of residents could afford to live in Sayan Campestre. But he said it is worth noting that the economy in Tijuana is doing well and there are cheaper options for workers there.

Mendez, a former Tijuana economic promotion director, said the new businesses have brought with them affluent people who are looking for places like what Sayan Campestre has to offer.

Two of the biggest upcoming projects are Landmark, previously called Bajalta, which has plans for 580 condos, and nearby Plaza Toreo with 456 condos.

The construction of Sayan Campestre unseats the NewCity Residential Diamond Tower as the new tallest building in the city by about 62 feet (19 meters). The Diamond Tower was constructed in 2008 and is part of the NewCity development, which will have a new medical plaza opening soon that is 370 feet (113 meters) and will become the second tallest building in the city.

For more on this story, go to The San Diego Union-Tribune.