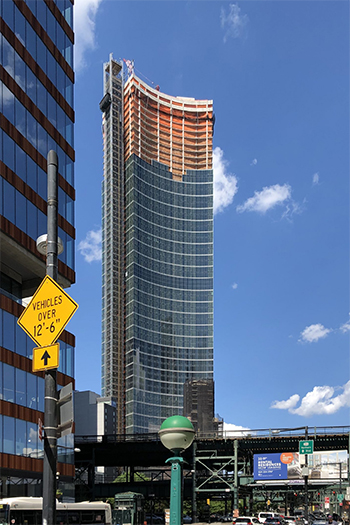 Construction has been progressing swiftly on Sven, since its topping out earlier in the summer of 2020. Photo by Michael Young.
04 August 2020 | New York City, United States

Curtain wall installation is nearing the parapet of Queens Plaza Park, aka Sven, a 755-foot-tall (230.1-meter-tall) mixed-use skyscraper at 29-27 41st Avenue in Long Island City. Exterior work on the 67-story tower, which is the second-tallest structure in Queens, has been moving swiftly since its topping out in late June 2020. The 978,000-square-foot (90,859-square-meter) project is designed by Handel Architects and is being developed by The Durst Organization, with Selldorf Architects as the interior designer. Hunter Roberts is the general contractor and Jaros, Baum & Bolles Engineering is handling the required mechanical systems for the edifice. The developers are aiming for LEED certification.

Recent photographs show the state of progress on both sides of the reinforced concrete superstructure. Thin white horizontal bands evenly spaced to every other floor break up the monotony of the dark green glass façade, which is closing in on the final levels. The building’s massing, which features a sweeping concave on both of its broad sides, makes it stand out from the rest of Long Island City’s rising cityscape. Meanwhile, the structural metal frame atop the flat roof parapet is currently being assembled. The adjacent clock tower of the Chase Manhattan Bank Building, aka the Queens Clock Tower, is still covered in thick scaffolding and black netting. The Art Deco landmark is being restored and integrated into the development’s 50,000 square feet (4,645 square meters) of office and retail space.

The property is set to yield 958 rental units, 300 of which will be set aside as affordable housing according to the Durst Organization. Amenities will include an outdoor swimming pool, a 20,000-square-foot (1,858-square-meter) fitness center, a library, co-working areas, a children’s playroom, and a demonstration kitchen.

The nearest subways are the E, M, and R trains at the Queens Plaza station and the 7, N, and W trains at Queensboro Plaza.

Sven is expected to open sometime in 2021.