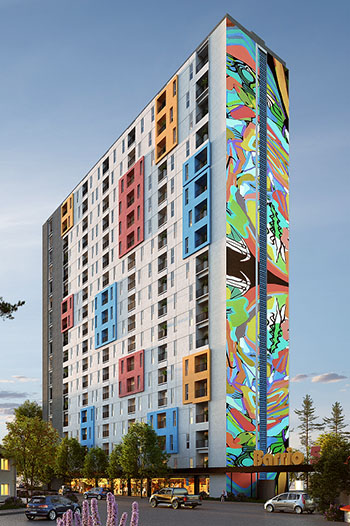 The façades of both buildings will be colorful, with a mural and details in orange, red, blue and white, evocative of the popular “neighborhood” of yesteryear.
04 September 2019 Guatemala City, Guatemala

A new real estate development intended for vertical housing aims to transform zone 5 of Guatemala City, and will include two towers of 17 and 18 levels.

Named Barrio 5, it will be located in the Saravia neighborhood, zone 5 of Guatemala City and will be used for vertical housing, with a commercial area on the first level.

According to Juan Manuel Alejos, the commercial director of Modus Vivendi, the developer of the project, this real estate development is intended for the demand sectors C2, C3 and D, where the housing deficit is estimated at nearly 68 percent.

In total, 35,000 square meters will be built throughout the project, and it will have 394 housing units distributed through both towers. In addition, it will have five basement levels for 347 parking spaces.

Due to its proximity to a nature reserve, Barrio 5 had to take into account many aspects of sustainability and waste management, including wastewater treatment. Soil studies were carried out on the hillside, and water studies were conducted, as the complex’s supply of drinking water will be drawn through its own well.

High-performance elevators will also be used as part of the energy-efficiency strategy, and Alejos stressed that the towers will include high-quality finishes.

The façades of both buildings will be colorful, with a mural and details in orange, red, blue and white, evocative of the popular “neighborhood” of yesteryear.

Construction should begin during the first half of 2020 and end in 2021. According to the developer, a steel-based construction system will be used, with concrete structural walls and divisions between apartments, using a prefabricated system that mixes tablayeso, maya and thermo-acoustic insulation.

According to Alejos, using a steel structure allows greater efficiency of space and apartments with greater height. “More functional spaces are achieved, and this is a benefit,” he concluded.

For more on this story, go to Revista Construir.