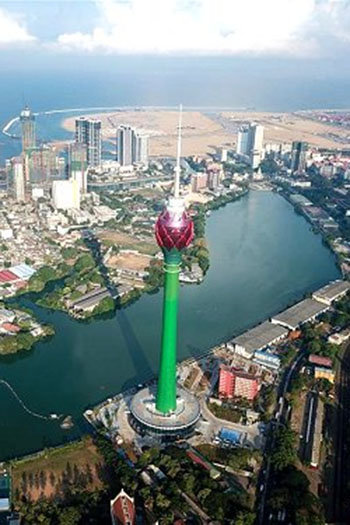 Sri Lanka and China signed the Lotus Tower agreement in 2012 under the Belt and Road Initiative.
17 September 2019 | Colombo, Sri Lanka

The 350-meter-tall Lotus Tower, located in the heart of Colombo city, hosted an unveiling ceremony on Monday, 16 September 2019.

The project cost over US$100 million, 80 percent of which has been funded by China under the Belt and Road Initiative (BRI), and includes a television tower, a hotel, a telecommunications museum, restaurants, auditorium, an observation deck, a shopping mall and a conference center.

According to a Colombo Page report, Sri Lanka and China signed the Lotus Tower agreement in 2012 under the BRI to build the TV tower, with China National Electronics Import and Export Corporation (CEIEC) being the general contractor.

While still under construction, Sri Lanka President Maithripala Sirisena decided to open the structure to public.

“We still have not completed this project, but we decided to go ahead and open sections of the tower that can be accessed by people.”

“We still have not completed this project, but we decided to go ahead and open sections of the tower that can be accessed by people,” Sirisena said during the unveiling ceremony.

The project, which began in 2012 under the then-president Mahinda Rajapakse, faced numerous delays amid funding issues.

The Sri Lanka Telecom (SLT) in a release said the Lotus Tower is foreseen to be one of the significant landmarks and an epitome of the country’s economy, culture and development.

The tower, which is expected to function as Sri Lanka’s digital TV tower, is built with fiber optic cables and is fully equipped with necessary telecommunication equipment.

For more on this story, go to The Indian Express.