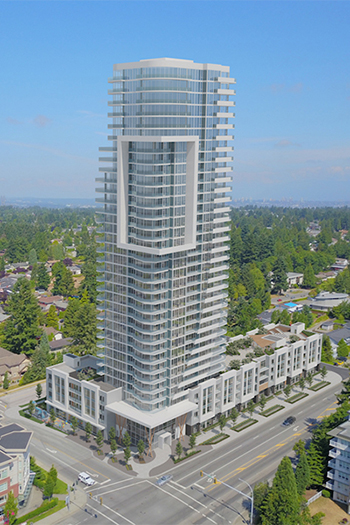 The building would have created a total of 329 homes, including 70 affordable ones for first-time homebuyers and middle-income families and individuals, and 66 accessible units.
04 December 2019 Delta, Canada

A years-long proposal to build a residential tower in North Delta was rejected by the city council on 2 December 2019 in a 5-2 vote, with only Delta Mayor George Harvie and Councilor Dylan Kruger voting in favor of the project.

Local developer Hari Homes proposed to build a 35-story tower at 7597 120 Street, right on the edge of Delta on the municipal border with Surrey, as previously reported by CTBUH.

Designed by Barnett Dembek Architects, the building would have created a total of 329 homes, including a partnership with BC Housing that would have provided 70 affordable homes for first-time homebuyers and middle-income families and individuals, and 66 accessible units. The mix was proposed as 151 one-bedroom units, 178 two-bedroom units, and six townhouses.

The proposal was not without controversy, however, as opponents expressed concerns on the perceived lack of affordability and the resulting traffic that would have been created from the new density.

Mayor Kruger said he was disappointed in the outcome but was pleased that many in the city council acknowledged there is a need to densify Scott Road.

Starting in 2021, this corridor will be served by TransLink’s new RapidBus service, with the fast and frequent bus route operating along Scott Road/120 Street and 72 Avenue from SkyTrain’s Scott Road Station to the Newton Town Centre Bus Exchange.

“To aid in the transition to a green economy, cities need to take the lead when it comes to creating livable, walkable communities. We aren’t going to do this by building more million-dollar single detached homes. We need to densify,” said Kruger.

“In Delta, we know that this needs to take place on Scott Road, our busiest transit corridor, a soon-to-be RapidBus route, near shops, and services. We build smart density not to increase traffic, but to liberate people from their cars. It’s not just good for the environment, it’s good for people, and I remain hopeful that we can work with prospective developers to get to ‘yes’ on some exciting upcoming projects,” he added.

Possible alternative designs for the site have not been released.