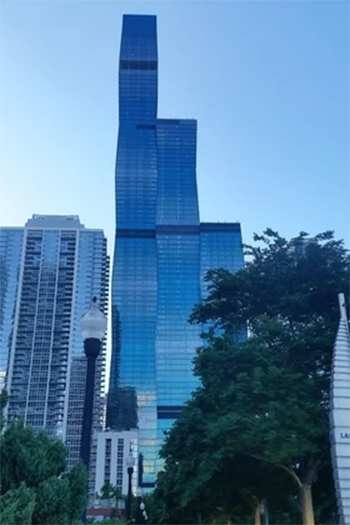 Vista Tower, which has topped out, is part of the sprawling Lakeshore East development in Chicago.
31 July 2020 | Chicago, United States

The Chicago developer building the 101-story Vista Tower on the Chicago River has agreed to buy out its majority Chinese partner for US$270 million, ending a partnership that began in 2014.

Wanda Hotel Development, a unit of Chinese billionaire Wang Jianlin’s business empire, has agreed to sell its 90 percent stake in the skyscraper for US$270 million to help cut debt, according to a Wanda securities filing. The company sold its interest to an affiliate of Magellan Development Group, which owns 10 percent of the project at 375 E. Wacker Drive.

Wanda had been seeking a buyer for its stake in the condominium-and-hotel development since at least 2018, deciding to sell its investment well before the building’s completion this year. The US$270 million price represents Wanda’s equity stake in a project estimated to cost US$1 billion. Magellan and Wanda financed construction with a US$700 million loan.

The sale is expected to result in a gain for Wanda of about HK$94 million (US$12.1 million) before taxes on paper, the company said.

The deal raises questions about the building’s 191-room hotel, which has yet to open. Wanda had planned to run the hotel under its own name, but it’s unclear who will take it over now. Given the sorry state of the hospitality market, any new hotel faces a daunting challenge attracting business and leisure travelers.

Vista Tower, which includes 400 condos, was expected to be ready for occupancy in the third quarter, according to an email downtown Ald. Brendan Reilly sent to his constituents in February. Buyers have signed contracts for just 184, or 46 percent, of the condos, with an average list price of US$2.6 million, or $973 per square foot (US$9,073 per square meter), according to Redfin.

Standing 1,191 feet tall (362.9 meters), the building is Chicago’s third-tallest skyscraper, after the Willis Tower and Trump International Hotel & Tower. Designed by Chicago architect Jeanne Gang, the building is the star of Magellan’s Lakeshore East development, a collection of high-rises west of Lake Shore Drive and south of the Chicago River. Lakeshore East includes two other high-rises, Cascade, a 503-unit apartment project, and Cirrus, a 350-unit condo building, that are under construction just east of Vista Tower.

Wanda Group, which once aspired to rival Walt Disney in entertainment, has been offloading assets after a debt-fueled shopping binge between 2012 and 2016 when the group snapped up European football clubs, properties in Beverly Hills and Hollywood studios. The group’s businesses such as cinemas and theme parks have been particularly challenged this year by the coronavirus pandemic. The Vista Tower disposal can help Wanda Hotel strengthen its financial position, the company said in the filing.

In March 2020, Wanda Sports Group agreed to sell its Ironman triathlon business for US$730 million in cash. Wanda Group has also exited real estate projects in London and Australia and disposed of stakes in flashier assets like Spanish soccer club Atletico Madrid. It has also reduced its holdings in AMC Entertainment Holdings, the biggest cinema chain in the U.S.

For more on this story, go to Crain's Chicago Business.