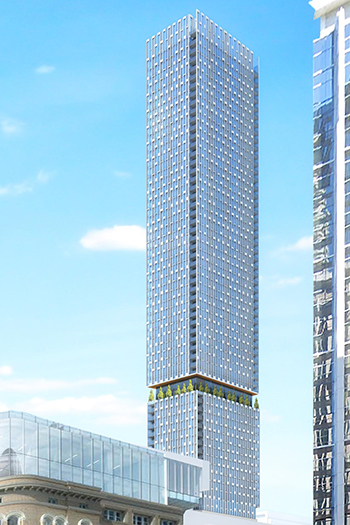 In October 2019, a proposal was submitted to the City of Toronto by Northam Realty Advisors and BTS Realty seeking rezoning for a condominium tower to rise atop the South Tower of the Parkin Architects-designed, 1983-built Bell Trinity Square office complex at 483 Bay Street. Now, new renderings have been released by architects IBI Group that give a fuller look at the tower's design and how it fits into its context.

No details specifying exterior materials were included in the project's October rezoning submission since materials are not normally specified until a proposal reaches the Site Plan Approval stage. The new renderings offer a clear look at the pattern of staggered rectangular vertical frames that make up the tower’s primary exterior expression, which is pulled apart at the corners for strips of inset balconies.

An aerial rendering of the tower looking south shows the tower, which rises to a total of 70 stories, perched above the Bell Trinity Square's ten-story South Tower. The image also provides a good view of larger levels proposed to be built atop the office building. Levels 11 and 12 are proposed to house 18 two-story "Sky Towns," while levels 13 and 14 would each house 17 residential suites. The 15th level would be home to both the indoor and outdoor amenity spaces. Floors in the tower above typically have 10 suites each. There are nine suites on the 29th and 30th levels, where there is a "reveal," shown ringed with trees in the provided image, and with a wood-tone soffit overhead.

To the west of the new tower is a new 15-story-high elevator core, which would be built just beside Bell Trinity Square's existing atrium. Residents would first ride these elevators to and from the ground, with a transfer to the new building at any level from 11 to 15. The 15th level will be where a full sky lobby and amenities are located.

The tower is east of Toronto City Hall, but north of Nathan Phillips Square, and therefore does not add a shadow to the square at any time of year. It also sits far enough east to not impinge upon the view of Old City Hall's clock tower when looking north to it from further south on Bay Street.

The total height of the building would be 227 meters, which puts the building less than three meters taller than the recently completed Ten York.