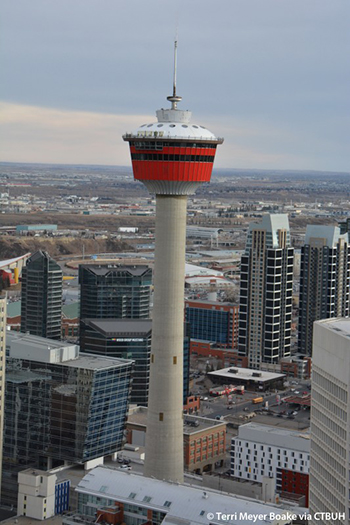 One of Calgary’s most recognizable landmarks reopened on 12 November 2019, nearly four months after an elevator plunged several stories with eight people inside.

It took firefighters four hours to rescue the people trapped inside the elevator when a cable broke on 12 July 2019, and the car stopped about 12 stories up.

Rescuers using a harness pulled passengers out of the disabled elevator and lowered them to the ground.

Patrons in the restaurant at the top of the tower walked down the stairs, or were carried by firefighters.

No one was injured.

“We conducted a thorough and comprehensive inspection of the elevator system,” said Blaine Coupal of thyssenkrupp Elevator Canada, the long-standing elevator service contractor for the Calgary Tower.

The website of Aspen Properties, owner of the tower, says 300,000 people visit the 191-meter-tall structure each year, paying for tickets, visiting the two restaurants and testing their courage on its glass floor.

The Calgary Tower was built to celebrate Canada’s centennial anniversary in 1967. It was completed in 1968.