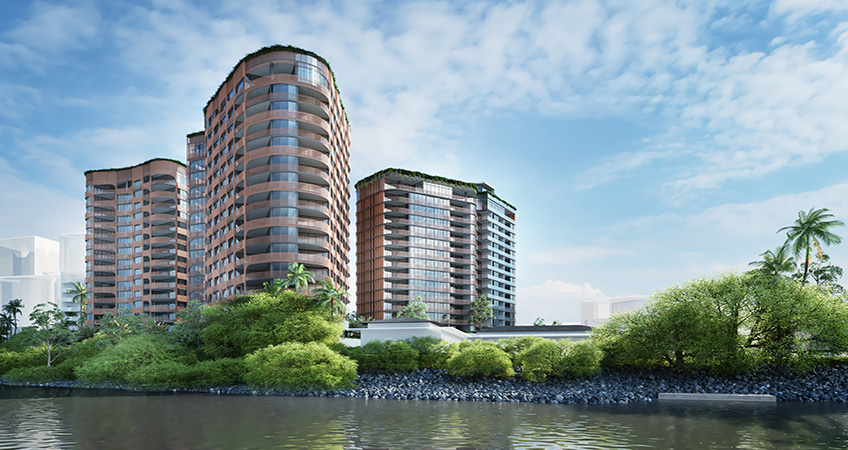 The proposed design of a residential project at 600 Coronation Drive in Brisbane echoes the ripples and curves of the nearby river. Image credit: John Wardle Architects
23 November 2021 | Brisbane, Australia

A new residential proposal for a long-vacant site in Brisbane draws its inspiration from its location at the river’s edge and from its relationship with a historic structure on the site.

The site at 600 Coronation Drive in Toowong has been vacant for over a decade. An earlier proposal for a trio of towers shaped like champagne flutes from developer Sunland was abandoned in 2018 and the site was sold to developer Consolidated Properties Group in March 2021.

The 1.5 hectare site was formerly home to the Brisbane headquarters of the ABC, whose buildings have since been demolished. The Middenbury House from 1866 and two associated weeping fig trees were preserved.

The new design for is from John Wardle Architects. Three residential buildings take their cues from the historic structure, using the plan proportions of the house, and also echo the bends and curves of the river.

The south-east corner of the site has been identified by the City of Brisbane as the preferred site for its Toowong to West End pedestrian and cycle bridge, which means that the proposal’s south-east tower is in doubt if the council proceeds with the green bridge location. The proposal includes pedestrian and cycle paths through the site which would connect with the green bridge.

For more on this story, go to ArchitectureAU.