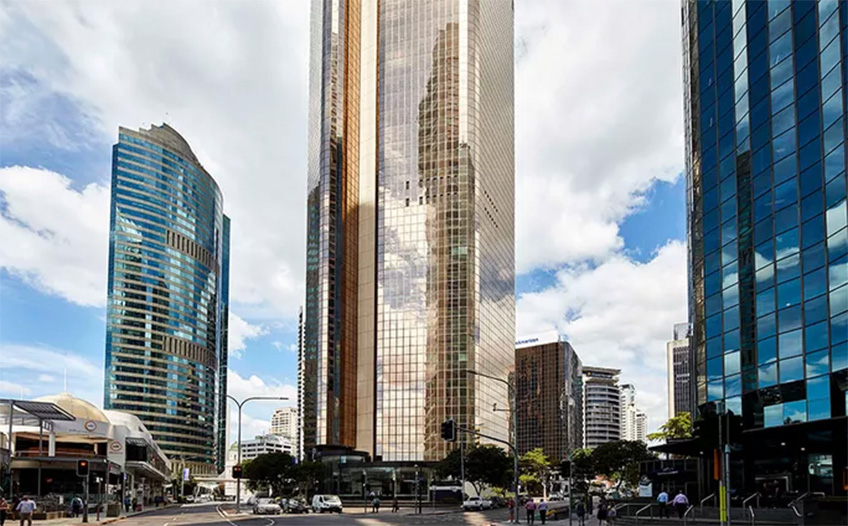 The commercial building, known as "The Gold Tower," has been offered to market at a time when few other Brisbane assets are for sale.

The building, which sits on a 3,477-square-meter island site at 10 Eagle Street, will be Brisbane's largest listing to hit the market in 2020.

When completed in 1978 the 35-story tower was Brisbane’s tallest building at the time. It comprises 27,826 square meters of net lettable area, 247 car parks, and is 91 percent occupied.

“While investor interest in Brisbane has continued during Covid-19, there has been limited availability of quality investments for sale,” Bond said.

“As such this asset is expected to attract strong pent-up demand from both offshore and domestic investors, with the biggest drawcards being the prime Eagle Street position, diverse income profile and future development upside.”

Brisbane CBD office market has remained quiet in the wake of the coronavirus hitting with no institutional office transactions occurring in the CBD since the sale of 66 Eagle Street in late 2019 by Lendlease, which was picked up by Deka for AUD$380 million (US$277 million).

Dexus, which picked up 10 Eagle Street in 2012 for AUD$195 million (US$142 million), has been selling buildings near book value during the pandemic with hopes that they will hold their values.

Ott said the location of the building, right in the heart of the Golden Triangle and in a premium position along the tightly held Eagle Street, presents a rare opportunity for investors.

“Investors will be drawn to not only the premium location, but the future development opportunity to add another building on the site or perhaps extend the floor plates.

“The asset fundamentals of the 10 Eagle Street tower also complimented Brisbane’s most active tenant market at the moment, in the 200 square meters to 1,500-square-meter size range,” Ott said.

The property is near major CBD infrastructure projects in Brisbane, with AUD$12.8 billion (US$9.3 billion) in developments, including the Cross River Rail and the waterfront precinct redevelopment, driving the area.

Across the road, Dexus is forging ahead with plans for a AUD$2.1 billion (US$1.5 billion) twin-tower project on the city’s riverfront.

Dexus has honed plans for two towers of 49 and 43 floors as part of broader plans proposed to transform the Eagle Street Pier and Waterfront Place.

If approved, the commercial precinct will be delivered over two stages, with the first stage involving the construction of public realm spaces, riverwalk, podium levels, basement and north tower. The second stage will involve the construction of south tower.

Last September, Dexus also took control of a property ripe for development with approval for a 274-meter skyscraper in Brisbane’s Golden Triangle.

With the off-market acquisition of the retail building at 171 Edward Street, Dexus has quietly opened talks with its Catholic Church neighbor with a view to engaging in a larger joint venture.