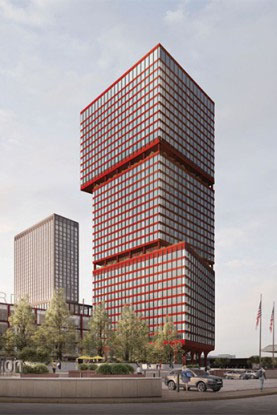 Brilliant red terra-cotta laces the design scheme of architect Vishaan Chakrabarti’s first Philadelphia skyscraper. He chose the fire-engine red material for a reason: It’s the next best thing to brick.

“You can’t really build a brick skyscraper for a whole bunch of reasons, but you can try to emulate some of the colors and hues your beautiful city has,” said Chakrabarti, founder of the architecture firm PAU, and Brandywine Realty Trust’s designer of choice for the first two new towers of the company’s Schuylkill Yards development.

“The addition of this red building into the skyline—it’s a risk, but I think this is a very daring and attractive project.”

“The addition of this red building into the skyline—it’s a risk, but I think this is a very daring and attractive project,” said Leo Addimando, managing partner with the Alterra Property Group and a member of the city design review (CDR) committee.

The buildings serve as the architectural foundation of the $4 billion development, set to transform the barren blocks surrounding the 30th Street Station and Drexel University, Brandywine’s partner on the project.

The massive neighborhood-making project has stirred excitement, and trepidation, in West Philadelphia. But on Tuesday, the focus stayed on Chakrabarti’s visually striking additions to the city’s burgeoning skyline.

With its bold hue, patterning, and its distinctive lilting design, the tower brings a fresh energy to an area where simple glass towers now gaze blankly over parking lots, high-speed roadways and rail yards.

Chakrabarti described Philadelphia’s historic red-brick character as the touchstone for the project’s coloring. “We think of its city as a city of weaves,” said Chakrabarti, whose firm’s name stands for the Practice for Architecture and Urbanism. “You’ll see a brick facade, but it’s not just red brick but also black brick, metal combined with limestone, stone terra cotta with brick. Its that weaving we are trying to emulate.”

Chakrabarti mentioned Frank Furness as a specific inspiration for the coloring of the tower and studded his Civic Design Review (CDR) presentation with reference to the master Philadelphia architect’s work.

A space called the High Line Plaza, named after the imposing CSX railroad trestle that cuts the space in two, will span the area between the two buildings. Brandywine’s team said Tuesday that they want to keep this open space humming with activity at all times. Their vision contrasts starkly with the eerily empty, almost-lunar landscape that currently defines the area.

“In that interest of movement, opening the lobby entrances of both offices to the back of the space will guarantee that kind of energy and movement,” said Thomas Balsley, founder of Thomas Balsley Associates, a New York City-based landscape design firm. “We believe that circulation, in combination with the retail, will make for a very vibrant public space.”

The architects, designers, landscapers, and developers on the CDR committee were uniform in their support of the project, applauding a skyscraper that will stand out from its neighbors without just towering above them.

“This is a step forward for high-rise design … it will stick out and create a new bit of skyline in West Philadelphia,” Addimando said.

For more on this story go to whyy.com.