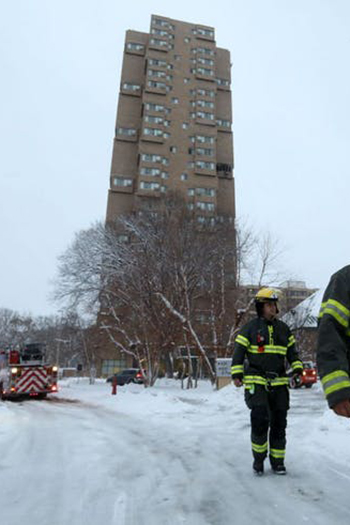 The 191-unit building for low-income clients is operated by the Minneapolis Public Housing Authority (MPHA) and is at full capacity with most units occupied by one or two adult residents.
27 November 2019 Minneapolis, United States

Five people died in the early morning of 27 November 2019 in a fire on the 14th floor of a Minneapolis public-housing high rise, with three others hospitalized, according to authorities.

The three-alarm blaze in the Cedar-Riverside neighborhood broke out around 4:00 am in the 25-story Cedar High Apartments at 1611 South 6th Street, near downtown Minneapolis. It was extinguished within 30 minutes said the Minneapolis Fire Department.

“Very tragic night at the beginning of a holiday weekend,” Fire Chief John Fruetel said during a news media briefing outside the building.

The alarm company that monitors the building alerted the Fire Department, and crews arrived to find flames shooting out of windows on the 14th floor. They encountered heavy smoke as they got to the floor in search of residents.

The 191-unit building for low-income clients is operated by the Minneapolis Public Housing Authority (MPHA) and is at full capacity. Most units have either one or two adult residents, said agency communications director Jeff Horwich. Many of them are of Somali descent, with a smaller number of Korean background, Horwich said.

Horwich said the 1960s-era building has “no history in terms of safety issues to speak of, that I know.” The building has smoke alarms, but the building code does not require a structure of that age to have a sprinkler system, he said.

Windows for one 14th-floor apartment were broken out and the walls visibly charred.

Authorities now turn their attention to how the blaze started. An investigation unit will be formed with investigators from the Fire Department and the Police Department’s arson unit, the mayor’s office said.

As of 9:30 am more than 100 people, made up mostly of building residents and a handful of community members, gathered in the lobby as firefighters began allowing some back to their apartments. Abdirizak Bihi said he recognized the name of two victims, both Somali-American. One was an 80-year-old man and another an elderly woman.

Ahmed Hussein was in the building Tuesday night visiting his parents, who are in their 60s and live on the 24th floor. At 3:45 am an alarm went off, and it was accompanied by an electronic voice saying “Fire, fire.” He peeked out the door, and the hall was filled with smoke.

“We never thought it would be a big fire,” he said. “As soon as I heard the alarm, I thought it was something small, but that’s when I suspected the issue was not smoke.”

He gathered his parents, and they went down the stairs because the elevators were deactivated. He saw firefighters heading up the stairs while ordering people back into their apartments.

Firefighters said they frequently respond to false alarms at this address. One said it’s challenging to fight a fire in this high-rise because of its small confined spaces. They also must confront language barriers when communicating with residents, many of whom are elderly.

Sixth Ward Council Member Abdi Warsame, who represents the area, said at least three of the victims were East African. He declined to give identifying-details of the victims. “We kind of know but we’re waiting for the next of kin to be notified,” he said. “It’s frightening, saddening. Most of the people here are seniors or people with disabilities.”

“Devastating,” Minneapolis Mayor Jacob Frey said a few hours after the blaze. “Keeping the residents, families, and friends in our thoughts as they wake to news of a tragedy,” he added.

Frey also expressed gratitude “to our firefighters who rushed toward danger and responded with courage to an incredibly challenging set of circumstances.”

Chief Fruetel said the victims were in different units on the 14th floor. Four were pronounced dead at the scene, and a fifth person was found in a stairwell and died at the hospital, fire officials said.

One person who could not use the stairs to escape had to be helped from the 13th floor by elevator, fire officials said.

By the time firefighters arrived, “the fire had a pretty good head start on us,” Fruetel said. “It had been burning for a while.”

Along with attacking the floors where the fire was burning, firefighters had to search the 11 floors above, the chief said. One resident on the 21st floor resisted being evacuated, according to the Fire Department.

Three other people “were quickly removed down the stairwell and put on a waiting elevator” and taken by ambulance to a hospital for treatment, the chief said. Their conditions were unknown. A firefighter was being examined for a minor injury, he said.

The fire was reported to be out as of 5:30 am, the Fire Department said. There is still no word on how the fire started.

The death toll, as it stands, matches the number who died in a blaze in February 2014, when five children from the same family died after their north Minneapolis duplex in the 2800 block of Colfax Avenue caught fire.

In October 2015, three children died in a fire in the 2700 block of North Penn Avenue in Minneapolis.

For more on this story, go to the Star Tribune.