As Plans for Melbourne’s One Queensbridge Tower Become Cloudy, Developer Ponders Next Steps 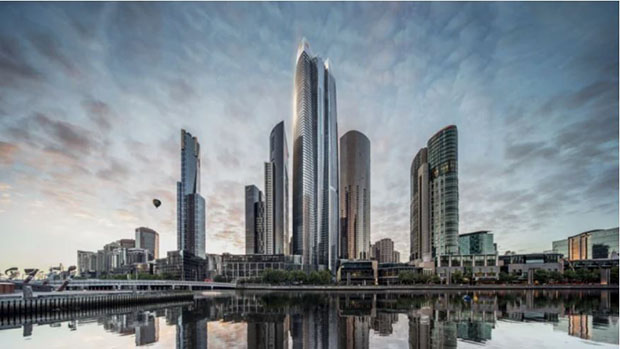 James Packer-backed casino giant Crown Resorts has been forced to rethink plans for a site in Melbourne’s Southbank, where it hoped to build Australia’s tallest skyscraper, after the Victoria Government denied its bid for more time.

In a blow to its long-held ambitions, Crown told investors on March 4 the Victorian Planning Minister informally rejected the request to alter approvals given two years ago to Crown and its joint-venture partner, Schiavello Group, for the AU$1.75 billion (US$1.25 billion), 90-story One Queensbridge Tower.

Crown will now look at its options for the project, which would top Q1 in Surfers Paradise as Australia’s tallest building.

Located opposite from the casino, One Queensbridge was to be 323 meters high – 26 meters taller than Eureka Tower, and would top Q1 in Surfers Paradise as Australia’s tallest building. Crown recently submitted a bid to extend the construction start date from March 2.

Crown has consistently said the project was subject to obtaining financial arrangements that were “satisfactory to Crown and Schiavello.”

“Unfortunately, these arrangements could not be achieved before the construction commencement date,” the company said, “Crown retains a 50 percent ownership interest in the land, and will consider its next steps for the property in conjunction with Schiavello.”

In a behind-closed-doors deal in 2017, state Planning Minister Richard Wynne approved the One Queensbridge Tower proposal, at a size more than three times greater than planning rules for the site had allowed. The tower was to feature 708 apartments and a 388-room hotel.

Critics at the time described the approval as a “free kick” for Crown, but Premier Daniel Andrews justified the executive decision by saying the project was of “state significance.”

As recently as last month, Crown executives reaffirmed their commitment to the One Queensbridge project, which was again included in the company’s half-yearly financial presentation as a proposed development, despite little progress being made on obtaining financing and finding partners willing to take on the “significant” residential risk.

“It’s in the pack for a reason,” Crown executive chairman John Alexander said. “That’s all I will say.”

For more on this story visit the Age.