As One Chicago Lakefront Project Gets a New Deadline, Another is Announced 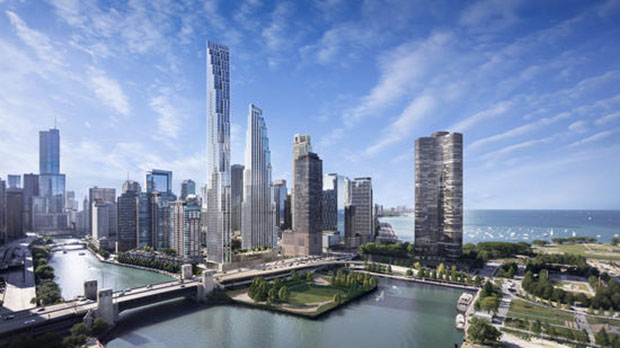 The owner of the Chicago Spire site could have another year to begin developing the lakefront site, four months after a downtown alderman rejected a proposal for two skyscrapers.

The Chicago Plan Commission on Feb. 21 voted to give developer Related Midwest until May 2020 to start construction on the 2.2-acre (0.89-hectare) site at 400 N. Lake Shore Drive. The extension still must be formally approved by the City Council’s Zoning Committee and the full City Council.

Overall zoning for the site, called a planned development, is set to expire May 6, 2019.

If a developer fails to start construction within six years of a planned development’s approval, the zoning process must start from scratch. The site already has received two extensions since a project was first approved under a separate developer in 2007.

The towers were to contain apartments, for-sale condominiums and a hotel.

But in October, Ald. Brendan Reilly announced his opposition to the skyline-changing design because of concerns from community groups about traffic, the height of the podium, security along the river and the inclusion of a hotel in the plan.

Reilly’s decision sent Related Midwest back to the drawing board, and it’s unclear when a revised plan will be presented.

The site along Lake Shore Drive and the Chicago River has been known for its 76-foot (23-meter) deep foundation since construction halted on the planned Chicago Spire more than a decade ago.

Irish developer Garrett Kelleher began foundation work on the planned 2,000-foot (600 meter) tall tower, designed by Santiago Calatrava, without a construction loan. It would have been the tallest skyscraper in the Western Hemisphere.

Kelleher’s project was doomed when global lending markets virtually shut down in late 2008.

Related, which now calls the development 400 N. Lake Shore Drive, has controlled the site since 2014.

Meanwhile, on the other side of Chicago’s CBD known as the Loop, plans for a new project have been announced.

A Wisconsin developer who played a key role in building Ford Field in Detroit and rebuilding Lambeau Field in Green Bay is pitching another: a multibillion-dollar plan to deck over Metra Electric rail tracks west of Soldier Field to build a mix of residential, office and retail space.

Several sources close to the matter say a partnership headed by Wisconsin executive Bob Dunn has briefed City Hall and other officials on plans, set to be officially unveiled in March 2019, to build over 34 acres (13 hectares) of Metra Electric commuter rail tracks and storage facilities just west of South Lake Shore Drive, from McFetridge Drive south to roughly 20th Street.

Air rights to build over the tracks were acquired more than 20 years ago by developer Gerald Fogelson, who built the huge Central Station residential complex just to the north, south and east of Roosevelt Road and Michigan Avenue. Fogelson had hoped to develop the adjacent air-rights property himself as a sort of a Central Station 2.0, and as late as 2015 he was looking for a partner, describing then a $3 billion long-term plan with 3,000 apartments and 500 hotel rooms.

But Fogelson’s plans never came to fruition, and a new group named Landmark Development has emerged, with Fogelson still involved, but with Dunn, who is president of Milwaukee-based Hammes, now serving as lead developer.

A spokesman for Landmark declined to comment, but sources close to the matter say that, while some key details are still in flux, plans are serious enough that officials have been briefed. The local alderman, Pat Dowell, 3rd, said she plans to present the proposal at a public meeting on March 13, 2019, adding that, while she wants to hear what local residents have to say before proceeding, the plans are “very impressive” and Dunn is “among the best developers I’ve worked with.”

Dowell also confirmed that, unlike other pending mega-projects, including the Lincoln Yards plan along the North Branch of the Chicago River and the 78 at Roosevelt and Clark Street, Landmark is not seeking a city tax-increment financing subsidy.

That means, with the decking itself being very expensive, the project is likely to be quite large, though the total size and the breakdown among retail, residential and commercial space is not yet known, and likely not final.

One business source familiar with the latest proposal says it offers the possibility of better connecting McCormick Place, at the south end of the Landmark property, to downtown Chicago. “That area is sort of an island now,” that source says, with the rail tracks, Lake Shore Drive and the vacant site of the former Michael Reese Medical Center to the west, and Soldier Field and rarely used parking lots that had been proposed as the site of the Lucas Museum to the north. “There are some big civic assets there.”

Another source says that while the plan is “very ambitious,” it could provide a sort of northern door to McCormick Place, prompting more retail, entertainment and other growth near the convention center. It also could boost development prospects for the Reese site, by better connecting it to the expanding downtown area.

Structurally, the project itself would resemble Millennium Park—a multi-layer deck over commuter rail tracks—only with residences and offices on top, rather than greenery.

Developers also are talking about some sort of rail link from this property to downtown, a link that could extend to McCormick Place or farther south. It’s not clear whether that involves reconstructing Metra’s dilapidated 18th Street station and getting the commuter rail agency to add more frequent service, or constructing a new line in available Metra right-of-way. Some sort of bus connection also may be in the works, turning the 18th Street station into a transit center for the mid-South Side lakefront.

For more on this story visit Crain’s Chicago Business and The Chicago Tribune.