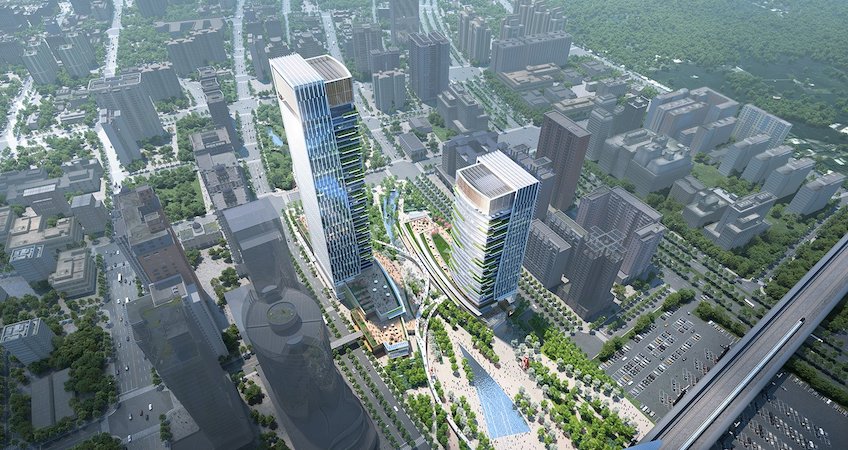 Global architecture firm Goettsch Partners (GP) and Taiwan-based development partners Honhui Group and Kindom have been selected to design and develop a new mixed-use transit-oriented complex in the city of Hsinchu, Taiwan. The project totals 149,500 square meters, including 122,000 square meters of office and 27,500 square meters of retail. The design features two landmark towers of 40 and 26 stories, flanking a sinuous, multilevel retail and entertainment complex that is directly connected to the city’s high-speed rail station. The large project site includes a variety of public park spaces with integrated landscape throughout. The project is a collaboration with local architect TMA Architects & Associates and landscape architect SWA Group. The assignment represents GP’s 13th collaboration with developer Honhui Group and the second with Kindom.

As a major technological hub, Hsinchu is considered the Silicon Valley of Taiwan and, more recently, has also emerged as a center for the bioengineering industry. This new development’s location alongside the high-speed rail station makes a workday commute possible from the major cities of Taipei and Taichung—each about 90 kilometers away—fueling Hsinchu’s growing technology and bioengineering industries at a new urban center.

The design of the mixed-use development is defined by sweeping curves and flowing landscape throughout, reinforcing pedestrian connectivity between the high-speed rail station and the complex. The multilayered pedestrian design creates abundant public landscape and hardscape features throughout.

Providing a visual identity for the city upon arrival by rail was an important aspect of the design. As such, the two towers on the site serve as a landmark gateway, welcoming visitors, commuters and tourists from around the world to Hsinchu. At night, the tower crowns illuminate as a pair of beacons, promoting a sense of place on the skyline.

“This project will be a tremendous economic driver for the district given its strategic location adjacent to the city’s main rail hub,” says James Zheng, AIA, LEED AP, CEO and president at GP. “The development will attract an expanded range of commercial and leisure travelers to Hsinchu.”

Throughout the design process, a high-quality, healthy and interconnected user experience was central to the design team’s efforts. Several transition spaces link the project’s interior and exterior throughout the podium, connecting the retail atria with outdoor public gathering and event spaces. Floating bridges further link the buildings together, creating a multilevel, publicly accessible network in a landscaped, parklike environment. Serving as a destination for public events, the development will further become an urban landmark in the city and one of the region’s premier civic spaces.

The Hsinchu High-Speed Rail Station TOD project is currently in design, with construction scheduled to start in 2024. The first phase of completion is expected in 2027, followed by the second phase in 2029.

For more on this story, go to Goettsch Partners.