Approval Won for a Residential and Hotel Scheme in Parramatta 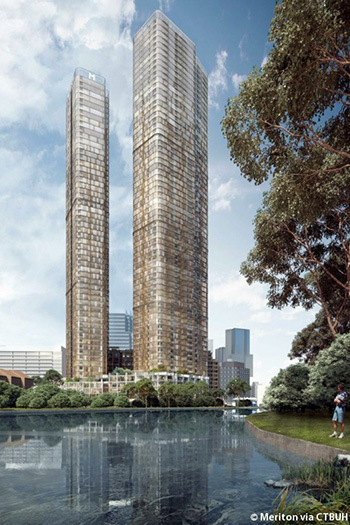 At 66 and 57 stories respectively, the two towers in the Charles & George Parramatta complex could become among the city's tallest.
11 October 2019 Parramatta, Australia

Despite Sydney’s slower residential property market in recent years, property tycoon Harry Triguboff will push on with plans to build what could be Parramatta’s tallest residential tower after getting the go-ahead from the New South Wales Planning Panel.

Meriton won approval this week, in early October 2019, for its 66-level glass tower and 58-level hotel at 180 George Street planned next to Parramatta River, lodged in July 2018.

While the cost of the project is recorded at around AU$229 million (US$155 million), estimates for the planned skyscraper development are higher, at approximately AU$320 million (US$217 million).

The Woods Bagot-designed two-tower project, located on the corner site of George and Charles Streets, will complete the development of the 7,978 square-meter site, which Meriton first began developing in 2005.

Meriton has been developing in Sydney’s “second CBD” since the early 1970s, with its most recent project, the dual-tower Altitude on Church Street on the former David Jones store site, completed in 2017.

The newly-approved George Street development will combine retail, five-star amenities and deliver 553 homes and dwellings, while the hotel component will comprise 346 rooms.

Other planned developments in Sydney’s “second CBD” include 5 Parramatta Square, the AU$130 million (US$88 million) multipurpose six-story building lodged by the City of Parramatta, which also forms part of the Parramatta Square project.

Hilton last year announced it was partnering with Ledrae Hotels on a new 29-story 245-room hotel in Parramatta, on the corner of Macquarie and Marsden streets.

Parramatta council says its population is expected to double over the next two decades.

The council currently has its Draft Local Strategic Planning Statement for land use planning to 2036 on exhibition.