Apartment Towers Pitched for South Loop, Near West Side in Chicago 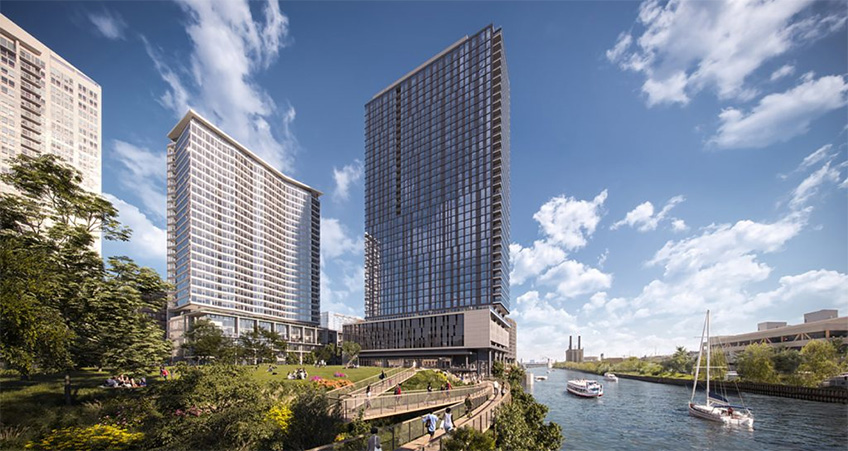 COVID-19 has slowed Chicago’s economy, but two bullish developers have drawn up ambitious plans that would bring a combined 1,200 apartments to two city neighborhoods.

The plans would add three new towers downtown, the tallest reaching 47 stories, plus more than 300 hotel rooms and retail space. They were disclosed by 42nd Ward Ald. Brendan Reilly in an email to constituents Friday.

Those big proposals, from Northfield-based Eterra Plus and Miami-based Crescent Heights, come at an uncertain time for downtown Chicago, which has been battered since March by the pandemic, as well as periods of civil unrest following the death of George Floyd at the hands of Minneapolis police in May.

Eterra Plus, which shares some of the same executives of Northfield-based Interforum Holdings, proposes two towers that would replace a parking structure at 525 S. Wabash Ave., a project that also would front Ida B. Wells Drive (formerly Congress Parkway) and Harrison Street.

That proposal includes a 23-story building with 314 hotel rooms and 261 apartments and a 36-story tower with 516 apartments.

The towers would connect to a low-rise podium with a grocery store and 151 parking spaces. The retail podium would include a second-floor restaurant, and it would be topped by an open-air amenities area.

The project, designed by BKV Group, does not require a zoning change, according to Reilly. The developer would pay more than US$3.6 million into the Neighborhood Opportunity Fund, which goes toward grants to support projects in underserved areas of the city.

Eterra Plus hopes to start building the US$300 million project by next fall, after securing city approval and financing, Eterra director Kristopher Plencner said. Eterra is in talks with hotel operators and grocery and retail tenants, he said. The project is expected to be completed in 2024, Plencner said.

Crescent Heights, meanwhile, seeks city approval for increased zoning density to construct a 47-story tower with as many as 413 apartments on a surface parking lot at 640 W. Washington Blvd., along the Kennedy Expressway.

Crescent Heights bought the site for US$20.1 million in May 2020, according to Cook County property records. The seller was Matthew Pritzker Co., an investment firm owned by the cousin of Gov. J.B. Pritzker.

The developer has yet to secure financing for the more than US$200 million project, Crescent Heights Vice President Jason Buchberg said.

The firm’s focus is on working with the alderman on approval of the project, and the timing of construction “would depend on market conditions and we take it day by day considering the volatility in market,” Buchberg said in an email.

“We believe in the continued theme of a ‘work-live-play’ dynamic and believe the site offers the same, if not more, of the attributes post-covid as it did pre-covid,” Buchberg said. “We are thinking about ways within the asset to provide even more individualized breakout/work spaces as well as re-imagining traditional amenities and services offered.

“Obviously, the market is a bit more challenging today but we are investors in the future and believe Chicago is positioned to weather the storm.”

Crescent Heights’ local projects include Nema Chicago, a 76-story apartment tower at the south edge of Grant Park that is the city’s tallest all-residential building. The skyscraper designed by a Rafael Viñoly opened last year and is more than 80 percent leased, Buchberg said.

If the Crescent Heights and Eterra projects move forward, it would continue a trend in recent years of parking lots and garages downtown being replaced by high-rises, amid decreased demand for parking and increased development activity.

Measures to control the coronavirus have contributed to shutdowns of many businesses and others operating at reduced capacity.
Some developments also have been delayed, including a work stoppage early on in construction of the planned 74-story, Helmut Jahn-designed condo tower on South Michigan Avenue.

Yet other projects have broken ground during the public health crisis, backed by investors taking a long view of the economy.

That includes the 60-story Salesforce Tower office building being developed by Hines and the Kennedy family on the Wolf Point site along the Chicago River and a 47-story hotel and apartment tower Sterling Bay and Magellan Development Group are developing at 300 N. Michigan Ave.