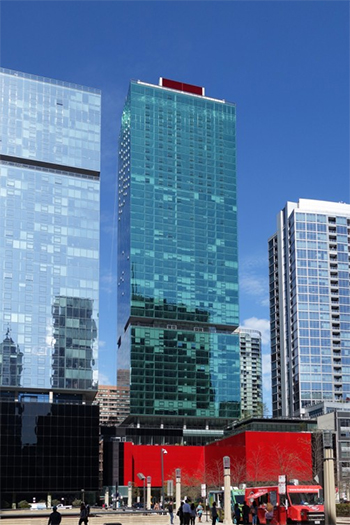 Some of the office space in a Streeterville, Chicago apartment will be converted into small classrooms to help families establish "learning pods" and "micro-schools" during the Covid-19 pandemic.
18 August 2020 | Chicago, United States

A 57-story apartment tower in the Streeterville neighborhood plans to convert some of its office space to small classrooms, betting that frazzled families will seek space outside the home to conduct remote learning amid the coronavirus pandemic.

The 490-unit Optima Signature, a skyscraper at 220 E. Illinois St. known for its bright red lower levels, is no ordinary schoolhouse.

Yet with many parents working from home since March 2019 amid COVID-19, and with many schools planning to conduct classes virtually this fall, the building’s owner believes there will be a demand for learning pods. So-called “pandemic pods” and “micro-schools” allow small groups of kids from close-knit families to study together in person with a teacher, tutor or parent.

Widespread closures of schools and day cares has left Chicago-area workers and employers scrambling for solutions.

Glencoe-based architecture and development firm Optima, which completed the Streeterville high-rise in 2017, in August 2020 began marketing four of its 25 office suites for educational purposes.

In an area of the city known for high-rises and lacking homes with yards, Optima believes parents are feeling the stress of homes also serving as offices and classrooms.

“For people who are living in the downtown environment, where they might be sharing a smaller space with two working parents and kids, those spaces can get small and loud and distracting,” Optima Marketing Director Ali Burnham said. “Here, you’re not fighting for space.

“We suspected there would be a need with schools going remote and families forming these pods.”

Optima expects interest to come from the immediate area, including from parents who typically send their kids to the Montessori school in the tower, Burnham said.

Optima Signature’s furnished suites typically are used as co-working spaces by Optima Signature residents and other nearby workers and businesses. All but four of the suites are now leased, on six-month and one-year contracts, Burnham said.

The suites are on the second and seventh floors of the tower and range from five to seven desks.

The spaces, or those in other co-working facilities, won’t be affordable for many families. They cost US$1,800 to US$2,400 per month.

Optima is offering space only and the firm is not providing teachers or tutors to conduct classes.

Traditional co-working companies may follow suit as consumer needs shift because of the virus, which has left most major-city office towers operating at a small fraction of their usual capacity.

Co-working giant WeWork’s CEO, Sandeep Mathrani, in June 2020 said the company was in talks with New York private schools about using some of the company’s spaces.

WeWork remains in talks with schools ranging from grade schools to universities and postgraduate programs, including some in Chicago, spokeswoman Keegan Calligar said.

New York-based Industrious, which has co-working spaces in office buildings in downtown Chicago as well as in other city neighborhoods and in Evanston, also is considering opening space to students.

“We’ve been approached about anything and everything,” CEO Jamie Hodari said. “There’s so many people around the country trying to figure out complicated situations.”

In Chicago and other cities, Industrious is receiving interest from families, Hodari said. The company is evaluating whether it can mix young students and office workers safely and without distraction, Hodari said.

Whether they’re used by business entrepreneurs, major corporations or students, co-working facilities and corporate offices are likely to move away from the recent preference of wide-open, collaborative layouts, Hodari said.

“One thing that is happening is, it’s probably the one moment in time when small spaces are better than big spaces,” Hodari said. “With schools, it’s the same thing. Is it better to have more classes, but with a smaller number of students in each class?