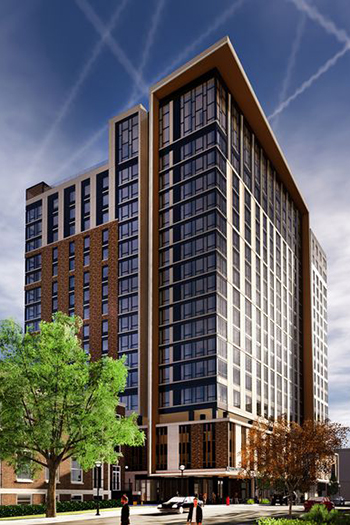 A 19-story high-rise behind the Michigan Theater in downtown Ann Arbor is headed to City Council.

After hearing mostly support from several residents who spoke out, the Planning Commission voted 7-0 on 1 October 2019 to recommend council approval of the mixed-use tower proposed along Washington Street. A six-story companion building was approved as well.

“I’m excited to see this project move forward,” said Commissioner Zachary Ackerman, calling it a creative use of space, and noting it would include some affordable housing for working professionals who otherwise may be priced out of the downtown.

Bloomfield Hills-based Cerca Trova LLC, which acquired the properties behind the theater, is teaming up with Chicago developer CA Ventures to propose mixed-income apartments and ground-floor commercial space to replace four rental houses and an old commercial building.

Commissioners expressed interest in also seeing solar panels atop the mid-rise building, and that’s now being discussed. Solar panels save money on energy and pay for themselves over time, said Commissioner Shannan Gibb-Randall, encouraging more solar.

A development team representative pushed back on Gibb-Randall’s additional suggestion of adding more panels atop the high-rise, arguing they’ve already maxed out the solar potential there.

Proposed amenities include a health and fitness center, a business center, and a club room on the 18th floor with a TV-viewing area, gaming area and an outdoor rooftop patio with a pool/spa.

An outdoor patio is proposed to allow outdoor seating or dining, with a mid-block pedestrian path between Washington and Liberty streets.

The proposed six-story building, behind Sava’s Restaurant off State Street, would include 19 apartments, ranging from studios to two-bedroom units, billed as workforce-housing “micro units.”

The high-rise would reach 208 feet (63 meters) tall, which is 28 feet (8.5 meters) taller than normally permitted in the D1 zoning district.

One of the features of the mid-rise building is that it would provide new bathrooms for the Michigan Theater within its first-floor footprint.

The development also would solve trash and recycling collection problems in the alley, with a new collection plan for surrounding properties, increase the tax base by 10 times or more, and remove environmental contamination, project architects said.

If approved by the City Council, the project could break ground in early 2020, according to the development team.

There would be 117 parking spaces on levels two and three of the high-rises, including three shared spaces with access to electric-vehicle charging. The developer plans to lease 15 overnight parking spaces in the adjacent public parking structure, through an agreement with the Downtown Development Authority.

The plans also include 246 bicycle parking spaces, most of which would be in a secured basement storage room.

For more on this story, go MLive.