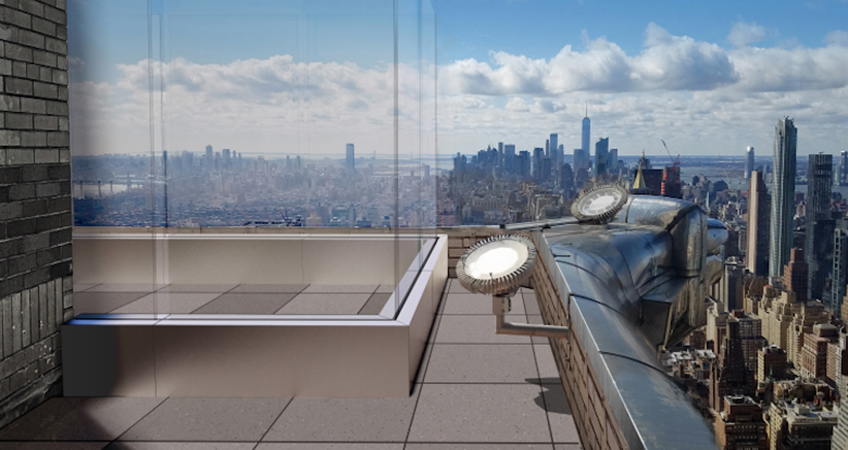 The Art Deco skyscraper, built in 1928, is getting a brand-new observation deck.

The Landmarks Preservation Commission (LPC) unanimously approved building owner RFR Realty’s proposal for a glass-walled viewing platform that will be open to the public.

Alongside architecture firm Gensler, RFR presented renderings of the space and details of their plans on Tuesday at an LPC meeting held via Zoom.
The building, located at 405 Lexington Ave. between 42nd and 43rd streets, is 77 floors. The deck will be located on terraces that surround the 61st floor, just above the silver eagles that jut out from the tower at every corner.

There is no timeline for the opening. An RFR rep reached for comment late Wednesday night declined to comment. “We are not releasing information,” the spokesman wrote in an email.
RFR bought the famed building across the street from Grand Central Terminal in March of 2019 for US$150 million—chump change, in skyscraper terms. (The previous majority owner, the Abu Dhabi Investment Council, paid US$800 million for the Chrysler in 2008.)

“I see the building as a Sleeping Beauty: It needs to be woken up and revitalized,” RFR chief Aby Rosen said last year in an exclusive interview, hinting that he hoped to resurrect a version of the private party palace Cloud Club.

Rosen also said he wanted to bring back an observation deck; the last one, dubbed the Celestial, closed in 1945 after about 15 years in operation on the 71st floor. He’s also expressed interest in opening restaurants, retail, and a food hall at the Chrysler.
During the LPC meeting, RFR and Gensler outlined how the restoration and creation of the observation deck would add 8-foot-tall (2.4-meter-tall) glass panels on the south and north terraces, modify existing doors to make them accessible to the public, and remove and replace existing windows.

To win support from the commissioners, RFR and Gensler took pains to show that the glass walls of the observation deck would be practically invisible from street level.

For more on this story, go to NY Post.